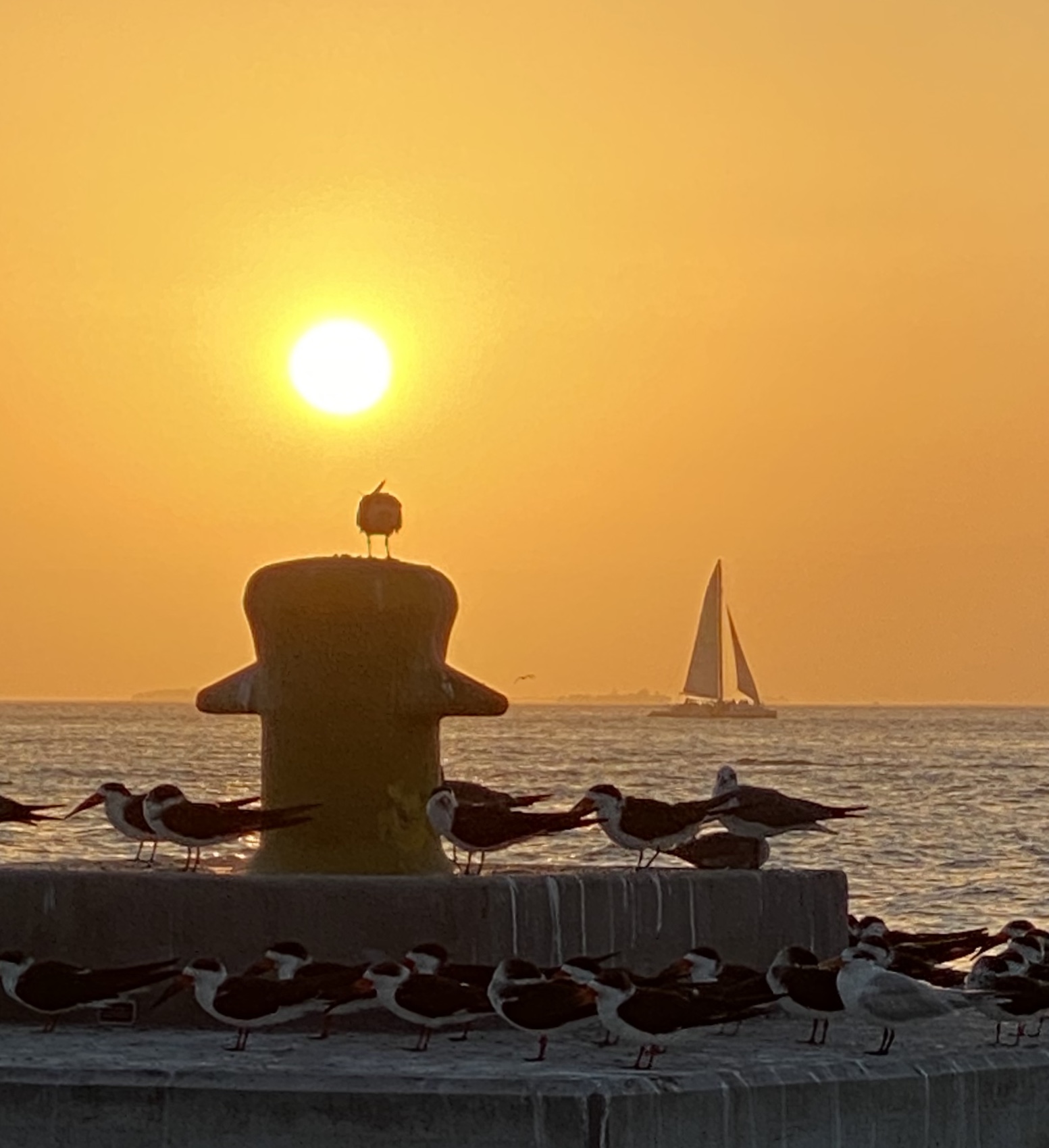 This was the 37th Anniversary of my first trip to Key West, Michael had accompanied friends on their honeymoon and I flew down, it was our 3rd or 4th date! While here we decided to get married, and that happened in August of that same year. I’ve been here about a dozen times since. Why do I keep coming back?

I should really start out by saying I write this blog for myself, like a diary, but hear from others that they like reading it, so I share it.

Back to Key West — I visited my favorite spots but found some new ones too!

This was a road trip with stops in Savannah, St Augustine, Vero Beach, and Palm Beach on the way.

I got into Savannah late so the light was nice.

A quick stop in St Augustine.

Then Palm Beach was next. Whether or not I buy anything I love walking down Worth Avenue. Great galleries and it’s beautiful!

I stop at the Laughing Dog Gallery in Vero Beach whenever I’m close. When I owned Carolina Creations we shared some of the same artists.

I’ve been fascinated by railroads, the architecture and the trains themselves, since I was very young. I ride a train whenever I get a chance. Of course Flagler was single handedly responsible for the development of the tourism industry in Florida. By the time I started coming to the keys in 1983 the new seven mile bridge had only been open a year. Before that you drove on the old railroad bridge that had been recycled. Michael had the privilege of driving on the old bridge that goes between Bahia Honda and Spanish Harbor Key. You drove over the top! Yikes! I could have never done that. The new bridge was completed over that stretch in 1980 I think. Michael was also at Sunshine Key when the old seven mile bridge blew up in 1981 extending his stay in the Keys for a while.

I arrived in Key West just in time for the Polar Bear Plunge – which I did NOT participate in!

I love the raku murals at Salute at Higgs Beach.

My favorite thing to do in Key West is to just walk and look at the flowers, the buildings, and the art.

There is poetry on some of the side walks, “The Sidewalk Poetry” project was initiated by the Key West Art in Public Places Board in 2012. The goal of the project is to spread appreciation for the Arts through the installation of winning poems on sidewalks throughout the City of Key West. Click here for a map so you can find all 17.

Key West isn’t quite as funky as it used to be but there are still some vestiges of it.

Of course the chickens still roam.

And you can’t forget to close the door because you never know who will wander in like this guy.

If you’ve never been here in my opinion the only place to stay is in the historic district since everything you want to see is there. While it is compact you can still wear yourself out walking. There are no parking structures so parking is at a premium. A few years ago, maybe 2017, they started a free bus service called the Duval Loop, you can hop on and hop off, it’s a lifesaver. Michael and I stayed in the Shipyard condos probably 8 or 9 years ago which is part of the Truman Annex, that’s where I stayed again this year. It’s a great location 2 blocks off Duval near the Green Parrot. It’s quiet, there is parking, and it’s gated so the only weirdos that might wander in is someone like the guy pictured above. Of course the weirdos are part of what I like about Key West, both human and animal!

As I said I did several firsts this trip, I’d never been to Fort East Martello Museum. I’d been to the West Martello Fort many times at Higgs Beach, they have a small botanical garden. But the Fort East Martello is larger and very interesting. Robert resides there for one thing. I’d never heard of Robert the Doll. He’s kind of creepy but has an interesting story. Gene and Robert were ‘best friends’ growing up. Legend speculates voodoo played a part in Robert’s formative years, while interviews with those close to the Otto family indicate a great deal of emotional energy was placed upon the doll during Eugene’s lifetime. It is said that young Gene would shift blame when he misbehaved as a child, pointing to the doll and saying, “I didn’t do it. Robert did it”. The story goes that weird things happen when Robert is around. He even has his own website ROBERT THE DOLL.

I had never heard about Carl Tanzler either, a love story that took place in Key West. Reading THAT story is not for the faint of heart.

The museum has displays that talk about Key West’s early years, the cigar industry, the Indians that first inhabited the Keys, and so on. They also have an extensive collection of work by the folk artist Stanley Joseph Papio. He was a welder and created art from the junk he accumulated. Some say it was a way to justify his junk yard on Key Largo. Today he would be called an outsider artist.

Another first was a visit to the Key West Museum of Art & History at the Custom House. Highlights of this museum for me were the artworks by Mario Sanchez. He is considered one of the most significant Cuban American folk artists of the 20th Century. A Key West native, Sanchez worked with wood and paint, mostly creating bas relief carvings that reflect images of earlier times on the island that were never captured in photos.

Right now there is an exhibition that closes soon called Literary History of Key West which tells about 20+ writers who worked here. I learned that Tennessee Williams was a painter as well as a writer. He took up painting as his literary career began to wane. The display of 15 of his paintings are on permanent loan to the museum.

This was my favorite.

And there is an extensive permanent display about Henry Flagler and his building of the Overseas Highway.

I noticed that my favorite directional sign of all time has changed a little since last year. I have photos of directional signs like this from all over the world. One of these days I’ll get one erected at the corner of my house. Two pieces of the sign disappeared since last year, one said “my uncle once killed a squirrel with a gravy boat” and the other “the key west chicken ate my cat”, and his choice for president changed too!

My favorite art galleries are Gingerbread Square, Key West Pottery, Art at 830, Cocco and Salem, and Guild. Galleries with New Bern connections include Gallery on Greene, Guild and Inspirations.

Some of my favorite public art around town:

Other shots from around town.

It is a small world as they say. I went to visit potter friends at mm17 who were there visiting with other crafts people. We were all telling travel stories, one of the other couples spoke about a recent trip to Mexico.  I said the last time I was in Mexico I stayed in the tiny remote town of La Manzanilla and rode the chicken bus to get around.

The guy we rented from dropped us off at the house and said I can get you anything you want ________ (fill in the blank). They said Detroit Dave?   I said yes!   They had been there 9 years ago. None of us could get over the chances of that happening. We met the same guy, in this tiny remote town.

I have a rule that I follow, never go and come back the same way if you can help it, this applies to anywhere, even the grocery store. So I left the Keys via the Card Sound Bridge and had to stop at Alabama Jacks, the last time I was there was with Michael. The place was packed. Here’s a little bit of history LINK.

The end of a beautiful day and a great two weeks! Where to next? Home to get some artwork done then off to Fort Myers.