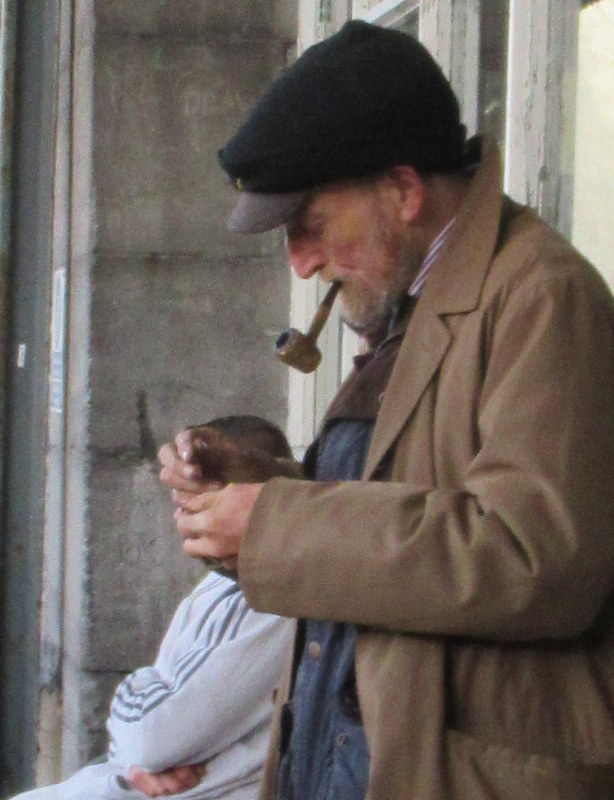 Exhausted from Hurricane Florence I guiltily decided to go on the trip I had signed up for last fall. I’m glad I did. We set off on a two day train trip from Dublin with Railtours Ireland. We traveled south west through the countryside of Co. Kildare.

We visited the Cliffs of Moher, among the highest sea cliffs in Europe. We were there for about an hour and by the time we left the fog had swept in and you couldn’t see any of the cliffs. This part of the country is breathtaking.

We drove along “The Burren“. The word Burren means ‘rocky place’. It looks like a a lunar landscape of limestone. We were told that though it seems like there is no soil it’s noted for its diverse flora and fauna, more diverse than anywhere in Europe. Migrating birds from the North Pole and from theMediterranean and points further south bring the seeds that grow in the crevices in the rocks. This area also has many times more rainfall that Eastern Ireland.

We stopped at Bunratty Castle and Folk Park in Co. Clare.   The castle was built in the 15th Century and is furnished with period furniture and artifacts. I found the grounds most interesting – a 19th century Irish village with buildings from around the region.

We eventually arrived in Galway, where we had time to explore on our own. One of the highlights was hearing a group of young Irish musicians performing on the street.

Galway has a lot of young people and lots of tech jobs, It’s history began with a fort built in 1142. Through the Middle Ages it was a thriving port, it was involved in many wars through the ages, the potato famine of the mid 19th century and never regained strong economic growth until the late 20th century.

On day two we went to the Connemara region. When thinking about the area these are the things that come to my mind – few trees – thousands of miles of stone fences – narrow roads – windswept landscapes – mountains – fuschia hedges – sheep – lots of lakes and the Atlantic Ocean.

We stopped at the Kylemore Abbey & Walled Victorian Gardens – which was built in the late 1800s by Mitchell Henry, a successful businessman and liberal politician. It changed hands several times and in 1920 it was taken over by Benedictine Nuns whose Abbey in Belgium had been destroyed in World War II. They opened a world renowned boarding school for girls and restored the Abbey and Garden. The Walled Garden covers 6 acres and had fallen into ruin. In 1995 the Nuns began restoring it and it was opened to the public in 2000. The garden had 21 heated glass houses and a work force of 40 gardeners when it was first established and was compared in magnificence to Kew Gardens.

We continued on the Connemara Loop which was hauntingly beautiful.

There are only a few towns in the area and my favorite is Clifden.

We heard that if the sheep are on top of the mountain (in this case cows) the weather is going to be good….

There are a lot of sheep in the area, and they are free range, so you have to be very careful driving on the narrow winding roads because you never know what’s around the corner.

I loved this area – it’s kind of other worldly.

We went back to Galway and caught the train to Dublin.

I realize that I know little about the history of Ireland, as part of my blogging after a trip I go back and research the places I’ve been. It was interesting that  looking around Dublin looks like a pretty new city, I made a stupid comment about maybe because it was bombed during WWII. I was corrected – Ireland was neutral during the war so was never bombed. I wondered what else I didn’t know! So have been reading up on their history.

Here is a great timeline.

My mom was a genealogist and I read in some of her papers that our ancestors came from Ireland way back during the time of tribes and clans around 200 A.D. in present-day Ireland. At that time the area a tribe or clan occupied was called a Lyne or Lynne. When the leader of the clan wanted to gather the people they blew a horn, our clan was near the sea and made use of conch shells for their horns, thus “Conchlynne.”  This tribe – Conchlynne – was located where the city of Belfast now stands. for some reason members of the tribe migrated across to Scotland and then south to Nottinghamshire, England where the name is found in the 1600’s. The name turned into Conklin somewhere along the line in the US. When first coming to the US they were glassmakers.

We aren’t going to make it to Belfast on this trip – that will have to wait until next time.

I wasn’t in love with Dublin but did find a few areas I liked. Here are few photos from around town.

Two things that have made a huge impact on this city – Heineken and the musical group U2.
Signs and decorations on buildings…

Learning about the book of Kells at Trinity College (founded in 1592) was really more interesting than seeing it to me, since you can only see two pages, but the lengths the monks went through to make it were extraordinary.  They made it on the isle of Iona, where we are headed when we meet up with others from New Bern.

The best part about the visit to Trinity College was seeing the long room, the library in the same building (which houses 200,000 of the Universities oldest books). You would recognize it from the Harry Potter movies, They weren’t allowed to use the library in their filming but they based the one they created on it.

Next post….. traveling north to the Giants Causeway, Northern Ireland, and then Scotland. We really didn’t see a lot of either country but what we did see we really like.