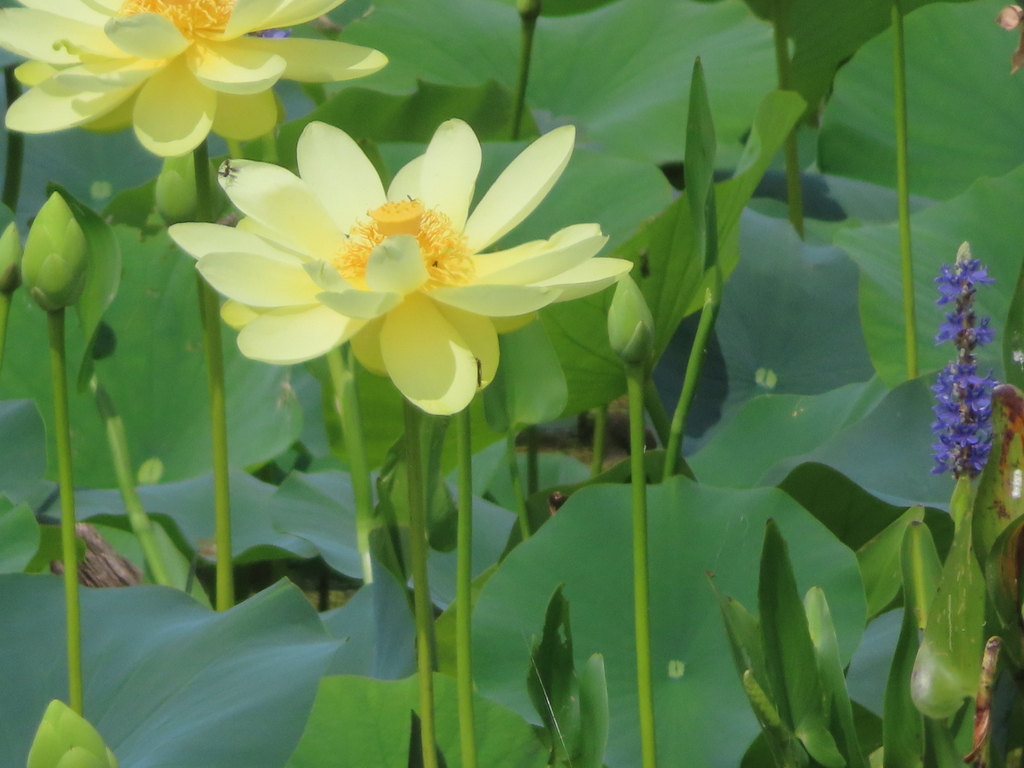 In May I took my RV to Florida to visit 3 State Parks meeting a friend with her RV. We started at Paynes Prarie Preserve near Gainesville. The park itself covers 21,000 acres, there are hiking trails, biking trails, a large lake, an observation tower, free roaming horses and bison, lots of birds and alligators. The shower in the campground was one of the best I’ve been in and each campsite had a buffer between it and the next one.

One of my favorite things were the American Lotus. Along I-75 you can see them and from the road that goes from the Park into Gainesville.

Frankly the alligators I could do without but we did have an amazing encounter with one on the La Chua Trail which is in the NE part of the park. There is a board walk that goes around a large sink hole called the Alachua Sink, that was filled with hyacinth and gators. As we walked along we could see an alligator here and there along the edge and all of a sudden a plane passed overhead and they all started bellowing. It was really something to hear!

As we were standing on the boardwalk all of a sudden a giant (14 footer) alligator attacked another one that was right in front of us, probably 15 feet ahead. The one being attacked obviously was in the spot the big one wanted to be in. All of a sudden this giant guy came straight at us, and stopped underneath us under the boardwalk we were standing on. We could tell how big he was because the boardwalk was 8 feet wide and he stuck out 3 feet on each side. What an experience! He sat there underneath us (fortunately the boardwalk was about 6 feet above him) for about 10 minutes then continued on his way to another hole.

My friend is also an artist, taught art and science, rides a trike, and owned a gallery for many years, so we have a lot of common interests. I’m more apt to want to see the towns than she and she’s more interested in the alligators than I am but that makes us each go see things we might not otherwise.

We were both interested in seeing 500,000 bats fly out of the bat houses at the University of Florida! Why do they have these big bat houses? Well it turns out bats had taken up residency in a stadium at the University and the smell and mess they made caused the school to take action. They built the bat houses but it took a few years before the bats started to inhabit them. At dusk every night people gather near the houses to watch the bats emerge.

Another thing we enjoyed at the university is the Butterfly Rainforest, a 6,400-square-foot screened exhibit. It was the best butterfly house I’ve visited and I’ve been to a few. The thing I found most interesting is the extensive research lab associated with it. They have one of the world’s largest Lepidoptera collections, representing most of the world’s 20,000 butterfly species and many of the estimated 245,000 moth species. The laboratories focusing on molecular genetics, scanning electron microscopy, image analysis, conservation and captive propagation of endangered species.

I had driven through the little town of Micanopy before, but never knew how to pronounce it – Mick-a-no-pee. It’s just down the road from the State Park, this town is the perfect example of old Florida. There is a great coffee and pastry shop in a typical Florida cracker style house, Mosswood Farm Store & Bakehouse. We talked to one of the owners a bit and told her that we had both been retailers and complimented her on the shop, the merchandise, the way it was displayed, etc. We said the only difference was if our stuff didn’t sell right away we didn’t have to throw it away. She said “we never throw it away, our husbands Hoover it up!”

We took several drives through the countryside and one of the sites we passed was the Marjorie Kinnan Rawlings Historic State Park, she was the author of the Yearling. It’s in the tiny village of Cross Creek, another “Old Florida” town. The live oaks in the area are amazing. And we saw this turkey and chicks.


We discovered two plants I had never seen before, the White Prickly Poppy, and another called the Tarflower. I am seldom in Florida in May which is probably why I’ve never seen them before.

We rode a bit on the Gainesville-Hawthorne State Trail, where we were was a bit hilly so we didn’t ride far. Trikes are not known for going up hills easily! But it IS a beautiful trail, we just picked the wrong part of it to ride.


There was a lot more to see in the area that we didn’t get to like the Botanical Gardens, the Museum of Art, the Solar walk, Planetarium, History Museum, lots more trails to hike, and Primate Sanctuary just to name a few things.

Highlands Hammock State Park
From there we moved to Highlands Hammock State Park near Sebring. We didn’t like the campground as much, it was wide open with no buffer between sites but the bathrooms were nice. There are also wilderness campsites in the park. It was, however, a great place to ride our bikes and there is even a bike trail all the way into town and you can ride around Lake Jackson.

This is one of Floridas oldest parks and the CCC did a lot of work there. In fact there is a really nice CCC museum in the Park. There are 8 hiking trails and a wonderful 3 mile paved loop through the hammock. In many respects, the CCC was actually responsible for the creation of the Florida State Park system in 1935, allowing the state to take advantage of federal labor and funding to improve conservation lands. In all, eight Florida State Parks were developed under the program. The CCC set up the first of its 86 Florida camps in Sebring in 1933, and work in the park began on roads, bridges, the concession building and a visitor center.

Highlands Hammock State Park is home to more threatened or endangered species of plants and animals than any other state park in Florida, and many of these species play important roles in the ecosystems of the park.

One example is the gopher tortoise. These tortoises get their name from the long, underground burrows that they live in – like gophers. Many other species rely on these burrows for shelter, especially during fires.

The only animals we saw in the park were wild boars, an alligator that had obviously been fed because he made a beeline to us when we set up our easels to paint, and a couple deer.

This park is full of old growth live oaks dating back 1000 years.

There is a lot of shopping in Sebring, the Sebring International Raceway, Military Sea Services Museum, a live Theatre, a beach, Childrens Museum, airboat rides, a winery, fishing, and it is just south (30 miles) of Bok Tower and Lake Wales. I visited there last November, my favorite part was the tower and the lily pads.

Kissimmee Prairie Preserve State Park
The campground at this park is quite small and this Park is pretty remote and you might say there is really nothing there. It’s touted a a “dark sky” place where you can see the milky way. Yes there were a lot of stars but I was a little disappointed having seen the skies in places like Steamboat Rock in NW Colorado where there isn’t a streetlight for a hundred miles or more. That being said it’s quiet and seeing the wind blowing over the prairie grass is pretty relaxing.

I know you can see the Milky Way from the Park, but conditions have to be right, no full moon for one thing!

Of the three this was my least favorite and would probably not go back. We did ride around Lake Okeechobee and would have ridden our bikes on the trail but at the time many sections were closed.

The neatest thing we saw here were the CaraCara falcon and great sunsets.

This photo is from the Audubon Society, mine did not turn out this good.

So in my opinion Paynes Prairie was the winner! Next up – A trip to Colorado in June.