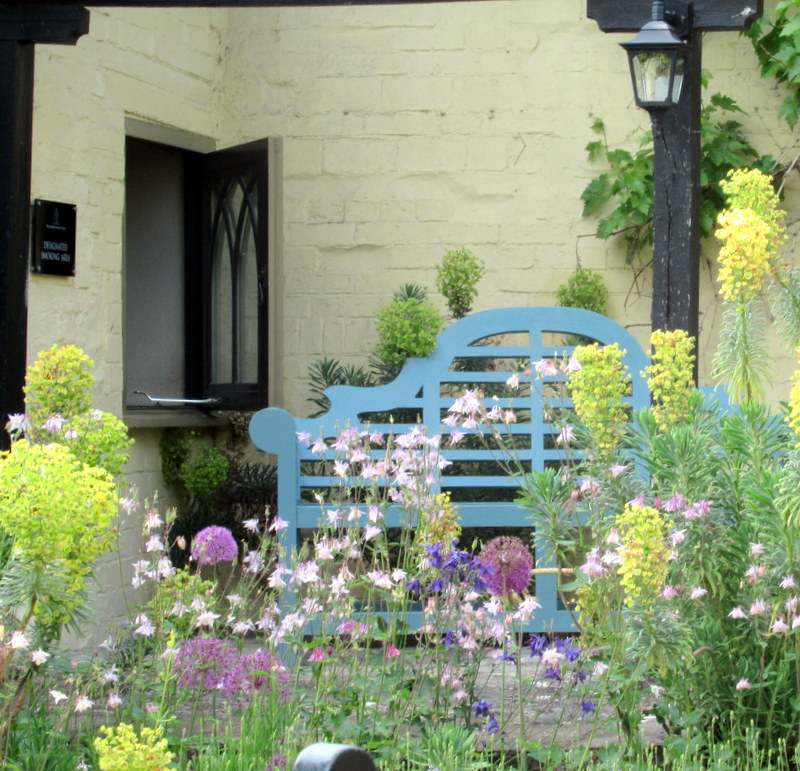 Road Trip – The Cotswolds part 2 plus Chelsea Flower Show – click the link to see LOTS more photos. The fabulous trip continued…. we stopped at Bourton-on-the-Water to take a quick stroll through town, then went on to Bibury.

One of Bibury’s main tourist spots and overlooking a water meadow and the river is Arlington Row, a group of ancient cottages with steeply pitched roofs dating back to the 16th century.

Henry Ford thought Arlington Row was an icon of England. On a trip to the Cotswolds he tried to buy the entire row of houses to ship back to Michigan so that he could include them in Greenfield Village.

A comment our guide said I thought was worth repeating. “We owe so much to the US, we could not survive without you, although I’m sure, your country feels it could survive without us.”

The very best garden in my opinion was Highgrove, The home of Prince Charles, and unfortunately we were not allowed to take photos. After hearing a taped presentation by him about the garden and his interest in organic I changed my mind about how I perceive him.

We had champagne High Tea, the gift shop was beautiful, the outdoor part was so well done I could do a dozen paintings just of it. The house was built in the 1790s and when prince Charles purchased it there was just a small kitchen garden. It is stunning and he and his gardeners have made it so it is beautiful in every season.

And my two favorites…

Another stunner followed that one –

Sudeley Castle… has nine individual gardens… all unique and beautiful. Elizabeth, Lady Ashcomb, is the current owner and lives on the estate.

It has played a roll in the history of England for over 1000 years. Can you imagine living in a castle where a queen is buried, you have your very own ruins and a large chapel too?

The castle was once home to Queen Katherine Parr, the last and surviving wife of King Henry VIII. Henry himself, Anne Boleyn, Lady Jane Grey, Queen Elizabeth I and Richard III have all played a part in Sudeley’s story. King Charles I (1600s) found refuge here during the Civil War, when his nephew Prince Rupert established headquarters at the Castle. Following its ‘slighting’ on Cromwell’s orders at the end of the Civil War, Sudeley lay neglected and derelict for nearly 200 years.

King George III was amongst those sightseers who came to admire its romantic ruins. Then in 1837 Sudeley was rescued by the wealthy Worcester glove-makers, brothers John and William Dent, who began an ambitious restoration programme which was continued by their nephew, John Coucher Dent, when he inherited the castle in 1855. His wife, Emma Brocklehurst, threw herself enthusiastically into Sudeley’s restoration, at the same time forging strong links with the nearby town of Winchcombe. It is the results of Emma’s dedication that are so evident in the gardens and exhibitions at Sudeley today. If you are interested in more history.

And on to the next town!

Loved traveling in a small group, we went on many one track roads that most tours would never have been able to go on.

While in the Cotswolds we stayed at Moreton-in-Marsh a market town granted its market charter in 1227.

Our last garden to visit in the Cotswolds before going on to Windsor Castle was Barnsley House… built in 1697 of Cotswold stone, is a perfect example of the English country house and garden. The acclaimed garden, with remarkable beauty, was designed by Rosemary Verey, recognized as the “Grand Dame” of Cotswold garden designers.

These snails are huge “Roman Snails”, brought by the Romans between AD 43–410 and they are protected. This one measured about 4″ long.

We then visited Windsor Castle – the oldest and largest occupied castle in the world – we were scheduled to stay just across the street when that pesky wedding bumped us. People were still going nuts about the wedding which took place on Saturday and we got there on Thursday. We stood where they took their vows and right beside where the queen sat. Again no photos inside but the church is divided by a wall so most of the celebrities sat in the back on folding chairs and had to watch the wedding on a screen, so you at home had the same view as they did!!

I had been in London years ago and been to all the major attractions so this time I was interested in seeing the pubs and buildings whose outside are decorated with flowers.

Our last day was visiting the Chelsea Flower Show.

Of the sculptures my favorites were the Alice in Wonderland and Wind in the Willows. My VERY favorite was the Red Queen.

I decided to walk back to the hotel, it was a couple miles through the city, I din’t realize that the commercial district around Sloane Square was having a competition – Chelsea in Bloom – so many store fronts were decorated with flowers.

I failed to mention the last two nights in London we went to two private clubs – The Oxford-Cambridge Club, and then The National Liberal Club. Both were lovely but I bet you can guess which one didn’t have as many rules and was more laid back.

On the way back to our hotel I walked past Buckingham Palace.

And I executed my plan perfectly, as I got to Picadilly Street, exactly as I came out off of the “Long Walk” I was at the door of The Ritz.

It was quite lovely!

A nice way to end an amazing trip.

When I got home I took my friends advice and stayed in bed all the next day and watched “The Crown”. It was a good plan!

What’s next? A couple sculpture workshops, then Michigan. Oh yes, in-between lots of artwork! I’ll post that too. 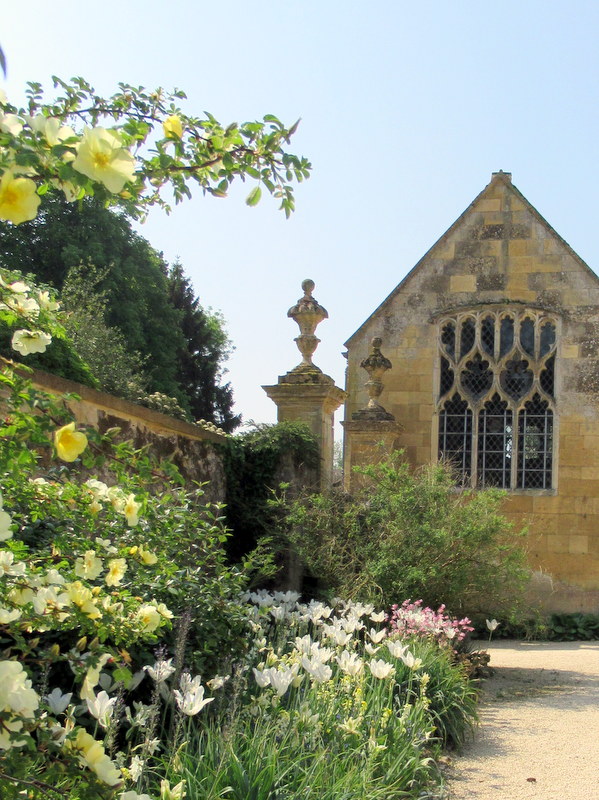 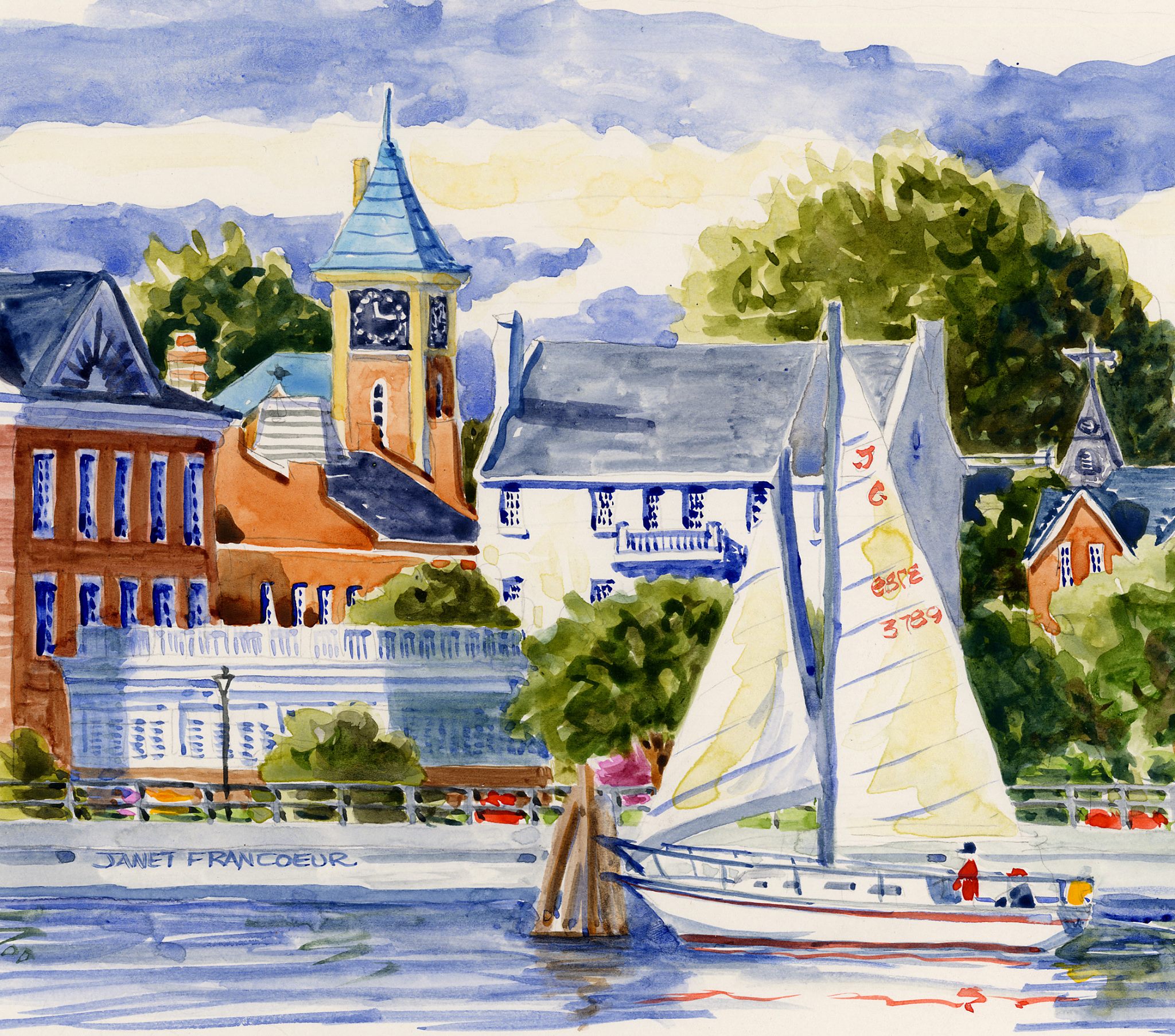 I recently switched my blog from blogger to wordpress – and you might ask why blog at all? When I owned Carolina Creations it was to keep customers informed of our upcoming events, what our artists were creating, what I was doing with my art, and I threw in some personal things as well.

I don’t have Carolina Creations anymore but I am still doing my own artwork. I’m traveling a lot (doing it while I still can), and I like to take photos and write a little.

It’s really a journal of my life, what I’m doing and what I care about.

A friend told me that she switched her blog from one host to another and she lost the whole thing (always backup!!). So years ago I started printing it every year or two. Since people don’t print photos like they used to they can disappear with a computer crash or like my friends blog did. And besides if you don’t print photos – in the future our kids or relatives will never know you existed or at least what you looked like!

I use blog2print which is an online platform that is so easy to use.

Probably because of my age I like flipping through the pages and holding a book in my hands.

So I can see myself continuing to blog for the foreseeable future – right now it’s more about my traveling than anything else – but one of these days I’ll be content to stay at home again in my studio and create, then it will go back to being more about art. I really do it for myself but I’m pleased that other people read it and enjoy it.

Thank you for reading!

Category: Uncategorized
Search
About Me