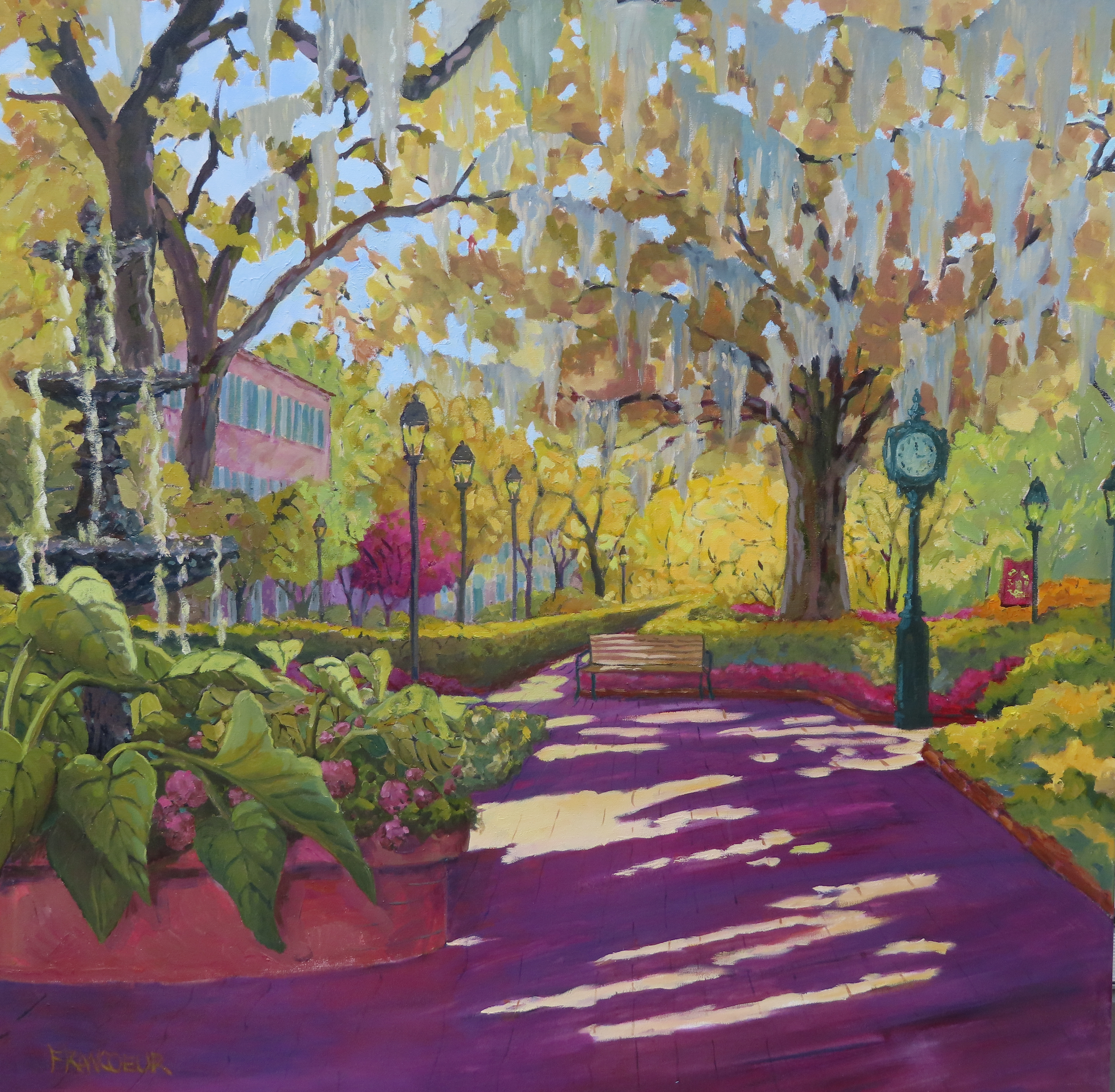 It’s been a great painting year for me. In the fall of 2021 I agreed to have a show at the Bank of the Arts with Carol Tokarski, former director of the Craven Arts Council. Thirty years ago we had a show together there so this is our 30 year anniversary show.

Carol and I are both from Michigan and went to the same small college, Siena Heights College (now University), in Adrian, Michigan. We were there at the same time but did not connect. When I arrived in New Bern in 1989 I went into the Arts Council and picked up one of their newsletters. One article said – Welcome to our new gallery director, Carol Tokarski. Wow I thought, what are the odds, since the graduating classes each year at that time were pretty small.

I called her up and said, ”I’m not really big on this alumni stuff but I went to Siena too.” The rest is history and we have been friends ever since. After the Craven Arts Council Carol ran the Kinston Arts Council for a few years but eventually moved back to ours. Carol has always been an oil painter. I’m just a new comer at it.

Through the years I’ve done a successful oil painting here and there but always reverted to watercolors because I never really had the time to experiment and really learn the medium of oil. Not that I’ve conquered it but at least I’m beginning to get the hang of it.

Why do I want to work in oils? To paint bigger, faster, more drama, and you don’t have to frame them under glass, or frame them at all if you work on gallery wrapped canvases.

My background is in ink drawing, doing very tight drawings (then later watercolors) of buildings. So loosening up, not having precise lines, is foreign to me! But slowly I’m making progress on that front.

Here are more of the paintings in the show.

My life in art has been a journey that started in the late 60s. I was a junior in high school and needed to take a foreign language to get into college. The only foreign language at our school was German and I wasn’t interested in learning that language for some reason (I CAN count to 10 in German!). A neighboring school had Spanish. I thought that would be more useful. We had an exchange program where we would be bussed to that school for two afternoons a week, Since we were already there we could take a second class. I chose art. We had art classes at our school, Addison, but the teacher was uninspired and not interested in anyone but the cheerleaders, so I too was uninspired. But the teacher in the other school, Hudson, Michigan, was fabulous.

We did wire sculpture, clay sculpture, drawing, etc. I was immediately hooked. I went home and told my folks I wanted to study art, and go to the American Academy of Art in Chicago. They said you need to get a real education. So instead I went to Siena, I still studied art, but had other college classes as well. I worked my way though school, going part time and working full time. It took me 10 years to get my degree! I do often wonder where I would be today if I had gone there. But I’ll have to say I have done pretty well as is.

In college I was not taught to paint, work in clay, or draw really. What college did was say, “here is your list of supplies, now paint, and afterwords we will tell you if its any good or not.”

Small watercolors from my Travel Series

I’m not a natural born artist. I’ve learned how to draw and paint and work in clay by experimenting, taking a workshop here and there, and studying other peoples work and figuring out how they did it. What I WAS born with, that comes naturally to me, is my sense of desIgn.

Pottery in the Show

I use underglazes like watercolors and the lines come from working in ink so long. All the pottery is dishwasher, microwave, and food safe. Fired to 2000 degrees.

Just a short history of my life in art

It started in the late 60s as I already stated. While in college my favorite things were drawing and printmaking. I started going to art shows and selling my work. I was mostly drawing buildings. I went through a phase where I would draw railroad depots and locomotives, then birds, but I’ve always mostly been interested in architecture. At one artshow a young man asked if I had ever used a rapidograph. I said no, didn’t even know what one was, bought one and used one of those drafting pens for the next 20 years. Somewhere along there a friend was going to watercolor classes once a month with a local teacher, so I started doing watercolors for a while, but eventually reverted to ink. We moved to Colorado and there I started to draw birds. The backgrounds were in ink but I added watercolor to the birds.

We left Aspen and spent the next 6 months traveling, ending up in the Keys (where we were on a previous visit and where Michael proposed to me). There I continued with the combination of ink and watercolor, again sticking to the bird theme. We told people we were looking for a place to move to that was on it’s way but hadn’t gotten there yet, was on the water, and had interesting architecture. A fellow we met on Big Pine said – “you should look at New Bern, it sounds just like what you are looking for.” So we started writing to organizations in New Bern and learned about Swiss Bear Projects, what the Arts Council was doing, and what was happening with the downtown.

We moved here in 1989, I started drawing the town, drawing East Front Street in ink. Having prints done of it, and then hand coloring the print. This is how I really learned to mix colors, I was unsure of how to do it after working in black and white so long. People would say ”I love your colors”, which I always found interesting since it was so new to me.

We moved here in our RV and stayed at the KOA (then it was a Yogi Bear), across the river, and decided yes we liked it but weren’t sure we could make a living. Michael said ”I’ve always wanted to live on a boat, if it doesn’t work out here we can move it somewhere else.” I said I guess If I can live in an RV I can live on a boat. So for the next 3 years we lived at what was then the Ramada. I really worked hard at my watercolors so eventually quit combining it with ink. We purchased a house on Pollock Street and I wanted to somehow put my mark on it and decided to learn how to paint on clay with underglazes to do a mural of town. That was the start of us working in clay. Michael asked to help me roll the tiles and said one day, ”I really like working with this clay.” I said ”why don’t you get a wheel and learn how to throw.” And so he did. He made the pottery, I decorated it. I painted pictures, he framed them, we were a great team. That was the start of our Celebration Pottery.

In 1990 we started Carolina Creations where we sold our work and that of other artists. That was on Middle Street, we moved to Pollock Street in 1995, and in 2002 purchased the building that Carolina Creations is currently in. I became interested in oil painting sometime around there and took a workshop here and there but due to the fact that I was running a business and also doing work to sell – I didn’t have time to experiment with learning a new painting technique so I might do one but not do another for a year.

Each time I started an oil it was like i had never done one before. Michael died in 2016, I sold Carolina Creations in 2017 and started working on the house we had built in 2007 getting ready to sell it. It was too big for just me. The only thing i really had to do was redo the floor of the two outside balconies and dress up the garden in the back of the house. I waited a year for a contractor who said he would do it, and did not. In 2019 I met a landscaper and I met a contractor.

The contractor tackled the porches and the landscaper not only helped me with the yard but also became my handy man and caretaker for the house when i’m gone. Still with all this going on there was no time to learn oil painting. By 2020 I was ready to put the house on the market, I found a house on Rhem which I purchased and renovated, once I had a place to move my kilns to I went to work to seriously sell East Front. Six months of moving stuff didn’t allow much time for painting. By then I was 2021 when we cooked up the idea for this show.

I thought to myself. It’s now or never, you’ve been talking about learning oils for years, now is the time. So here is the result.

It’s been a great year. Thank you for following me!