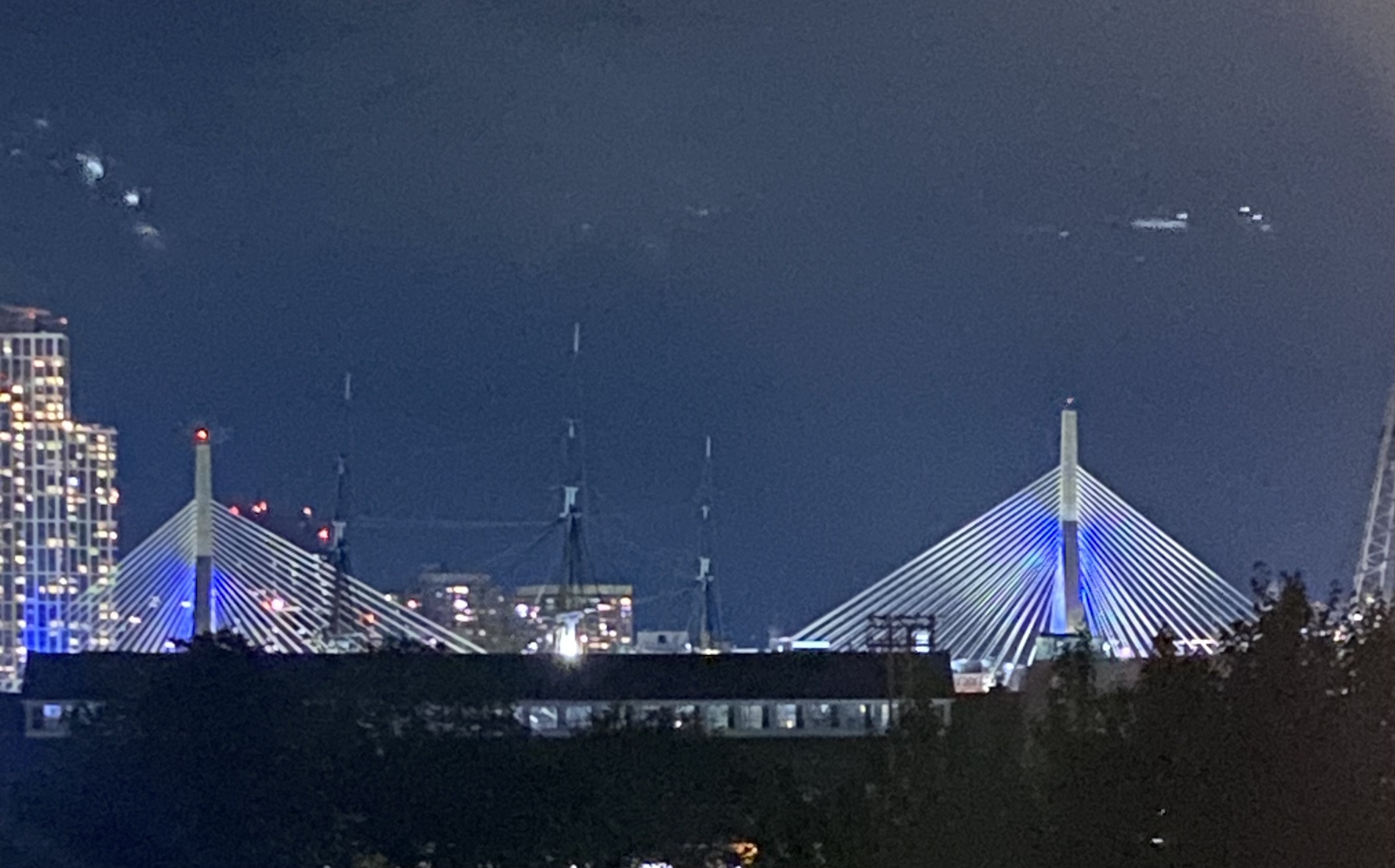 I got to spend a few days in Boston with friends. Our accomodations were in a condo in the Navy Yard in Charlestown, right across the river from Downtown Boston.

Known also as the Boston Naval Shipyard and the Boston Navy Yard, the Charlestown Navy Yard opened in 1800 as one of the first navy yards of the US Navy. It consisted of 130 acres. It closed in 1974 and 30 acres became a national historic site and the rest are now privately owned. Many of the shipyard buildings have been turned into condos, restaurants, hospital, and shops. . Part of The Navy Yard belongs to the National Park Service. There is a museum, and it is the home of the USS Constitution and the USS Cassin Young. Both of which you can tour.

Some of the buildings are ronavated Barracks, one is a Chain Forge which is currently under development.

Reading about the Chain Forge was interesting. They made chains for large ship anchors, including one that each link weighed 360 pounds and the whole chain 26,000 pounds!

Anchor chain is not measured by the width of the link. Rather, it is measured by the thickness of the metal rod used to make that link. Thus, the 4 ¾ inch anchor chain, the largest produced in the Chain Forge, is not 4 ¾ inches long as the name would indicate. Instead every single link is 4 ¾ inches thick and weighs 360 pounds.

View from my friends condo.

I have only flown through Logan before I never exited the airport so it was neat to be able to take the shuttle to the ferry and ride across the river to Downtown or to the Shipyard where I was staying.

It’s been about 40 years since I walked around the city so we took the hop on hop off bus and barely scratched the surface of what there is to see.

Each year in the Ship Yard there is a display of sculpture. This years artist is Michael Alfano who is known for creating figurative + surreal sculptures that convey philosophical ideas and abstract concepts.

Probably the most interesting thing we visited was The Mapparium. It’s is a three-story, 30 foot wide, stained-glass globe in the Mary Baker Eddy Library in Boston. It was lit in 1935. When you stand at the center of the perfect sphere, you can hear your voice in full 360-degree surround sound.

Mary Baker Eddy was an American religious leader widely known as the Discoverer of Christian Science. She is particularly recognized as the author of Science and Health with Key to the Scriptures, the book that explains her system of Christian healing. She founded The Church of Christ, Scientist, which today has branches around the world. She also established The Christian Science Monitor, a respected global news source that has won seven Pulitzer Prizes.

The chandelier below is also a calendar!

Boston Common is Americas oldest park established in 1634. ”Here the Colonial militia mustered for the Revolution. In 1768, the hated British Redcoats began an eight-year encampment. George Washington, John Adams and General Lafayette came here to celebrate our nation’s independence. The 1860s saw Civil War recruitment and anti-slavery meetings. During World War I, victory gardens sprouted. For World War II, the Common gave most of its iron fencing away for scrape metal. ”

The swan boats had already been put away for the winter but I still remember seeing them on my last visit to the park.

“In 1941, Robert McCloskey wrote and illustrated a children’s book about a pair of mallard ducks and their search for an ideal location in Boston to raise their brood of ducklings. At first they like the Boston Public Garden and its little lake with an island but after Mr. Mallard is almost run over by a bicycle, Mrs. Mallard decides that this was no place to raise baby ducks.

They fly around the neighborhood surrounding the garden and ultimately fly out to the Charles River and settle on a spot near the water. Mrs. Mallard lays eight eggs and they hatch into ducklings named Jack, Kack, Lack, Mack, Nack, Ouack, Pack and Quack.

Mr. Mallard then wants to discover the rest of the river and asks Mrs. Mallard to meet him at the Public Garden in a week. The book then details her journey back to the garden with her eight ducklings.

The window boxes on Beacon Hill were beautiful.

Trinity Church in Copley Square is pretty impressive. With all the exterior decoration it reminds me of the Cathedrals I’ve seen in Europe.

I’ve heard mixed reviews of the Isabella Stewart Gardner Museum through the years and now I see why. The building itself if amazing with the four story atrium.

“The Gardners loved Italy, and Isabella was especially passionate about Venice. In the summer of 1897, Isabella and Jack traveled through Venice, Florence, and Rome to gather architectural fragments for their eventual gallery. They purchased columns, windows, and doorways to adorn every floor, as well as reliefs, balustrades, capitals, and statuary from the Roman, Byzantine, Gothic, and Renaissance periods.

As much as any single work of art within the Museum, most visitors take away the experience of the Courtyard, where the stonework arches, columns, and walls create an unforgettable impression.“
Second to the courtyard, my favorite is this painting by John Singer Sargeant.

There was just not enough time to see more, we were off to Westfield and Springfield. I had no idea Dr Suess came from Springfield. They have a fabulous museum of his work and the sculpture garden with bronzes of some of his characters is charming.

The Big E had just opened in Springfield, a multi state Exposition. We didn’t go to it but I was interested in hearing about the Avenue of the States. There are replicas of each New England state’s original statehouse sitting on land actually owned by that state. In each of that state houses you can purchase food and other items from that state. It would be fun to go to the Big E just to see them.

Lunch at the Student Prince was great. The interior is full of collections, including a huge collection of beer steins, the largest such collection in the US.

Other than read a few of her books I really knew nothing about Edith Wharton. We visited her home in Lennox called The Mount. I was surprised to read that she won a Pulitzer Prize, and that she was a moving force for womens righs.

There is a sculpture show at the Mount called Sculpture Now. It runs through October 19.

So for a quick trip I think we did a lot. Next up? Key West the end of January but I can’t imagine I won’t go somewhere before then. Right now I’m preparing for my show at the Craven County Arts Council with Carol Tokarski (30 years after our first show there) which will open on November 18 and go through January 26..