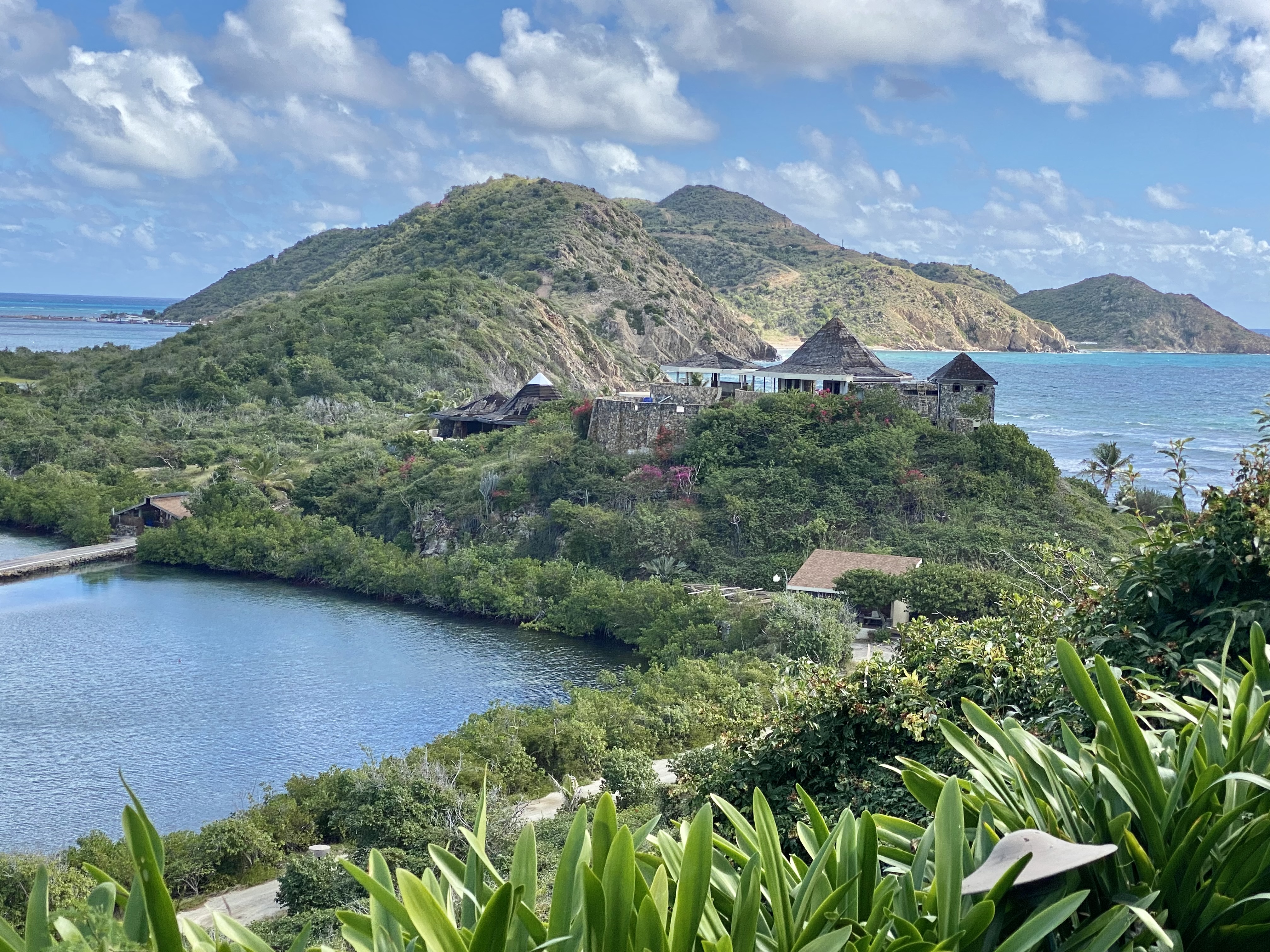 Before this trip the furthest south in the Carribean I had been was Cuba. On this trip two friends and I spent a couple weeks on Virgin Gorda.

I contemplated cancelling this trip due to COVID but then thought at least there I would be staying by myself and being outside most of the time. Actually I felt safer there than at home. Everyone wore a mask, even outside if you were around other people. At a grocery store they took your temperature before you could go in, had to sign a contact tracing form at a restaurant even though we were eating outside and no one else was there, every building you went in had hand sanitizer and if you did not use it they told you to within a few steps of entering. We had to take a test within a few hours of leaving the US and returning.

We flew into St Thomas where we spent the night. We climbed down the 99 Steps, built in the 1700s to make climbing Government Hill a bit easier, this staircase is one of St Thomas’s most famous landmarks. We walked around downtown and had a delicious dinner outdoors at Amalia Café. We didn’t get out of downtown  Charlotte Amalie. There are a couple of nice craft galleries, and of course the dozens of jewelry stores that the cruise ship crowd seems to love. Many local shops have not reopened as of yet, hurricanes Irma and Maria and COVID have kept them closed. Cruise ships have just started to return. We saw one on the way out and 3 in port on the way home.

Then the next day we took the ferry to Tortolla to Road Town and had a private tour of the island. There were beautiful views and the West End and Road Town were interesting. I can’t say I loved either St Thomas or Tortolla, but then I’m sure there are beautiful places on both islands. There is a great bakery on Tortolla called The French Bakery and Deli.

This is part of a mural that is painted on a curve on top of Fahie Hill, Ridge Rd depicting life on Tortola.

Once we got to Virgin Gorda I became the designated driver. We had a car with a left hand steering wheel so it didn’t take me long to get used to driving on the left side of the road. I’m not sure it would have been so easy to get used to if the wheel had been on the right – we did see some – or if I was in a panic situation.

Our condos were overlooking North Sound, wow. Thanks to Laurence Rockefeller a lot of the island is a national park. He also created Little Dix, an exclusive resort near Spanish Town where the ferries come in from Tortola. We tried to go for lunch but they were fully booked and not taking any outside guests. It, like many of the resorts, Little Dix was closed for years after the 2017 hurricanes Irma and Maria, which pretty much decimated Virgin Gorda and many other Caribbean Islands..

This is the view I woke up to every morning.

Up until recently there was a lot of undeveloped land around the north sound. There is still a lot not developed but much of the far end is being developed into an exclusive neighborhood called Oil Nut Bay. We did go there for lunch at the Marina Village which is the part of the development that is open to the public. To get to the rest of the development you have to be an owner or guest of one. What we were able to see of it was beautiful.

It seemed most of our days were centered around lunch! This was the most laid back vacation I’ve been on in years. And certainly the one with the prettiest views out my window.

One of the ladies I was on this trip with had lived here for 5 or so years in the 1980s. She and her husband managed Biras Creek Resort, and oversaw the building Tradewinds then ran it. So it was old home week for her. The 2nd lady that was traveling with us had worked for her for a couple of years there. And the place we stayed was owned by another former employee. So it was wonderful to be with folks that knew folks and what to see and do. Where we stayed was just up the hill from Leverick Bay, and we overlooked the North Sound, Saba Rock, Necker, Moskito, Prickly Pear and Eustatia Islands.

What a view. I never knew much about this part of the Carribbean. For some reason I was thinking they would be flatter like the Florida Keys. The islands in the BVI were all formed by volcanoes, except for Anagada which is the only one of the British Virgin Islands which was formed from coral and limestone so it stands only 28 feet out of the water. The rest are mountainous.

We had lunch at Saba Rock and got a tour thanks to my traveling companion knowing what names to drop.

Bitter End was destroyed and had just reopened a month before our visit. We walked off the end of the property past the staff only signs on the way to Tradewinds and when stopped, my companion told them why we wanted to look and they let us go on. What a mess. some of the buildings are still there, it’s currently being used for staff housing and a staging area for rebuilding Bitter End. They used salvaged wood from the destroyed buildings to build the new resort. It was hard getting any information about Biras Creek, which is closed, so we hired a boat to drop us off there just to see whats going on.

We visited the Baths of course! We did not swim there because it was pretty rough …

… but swam later at Mahoe Bay where you could see offshore how these islands were formed.

Leverick Bay was our “go to” place for lunch, just down the mountain from our condos. The road is a little hair raising, I hate it when you get to the crest of a hill and can’t see what is beyond! And the hairpin turns are a little tricky to navigate.

We saw the ruins of the copper mine and the Sugar Mill at Nail Bay. From what I could find out the Sugar Mill was in operation in the late 18th century. The ruins are on the site of Nail Bay resort. The grounds are well kept and the view is amazing. And the restaurant was delicious and outdoors like most on the island. The Sugarcane Restaurant. One thing I found interesting was that you could use the pool at places like Leverick Bay even though you were not staying there, and in the middle of Mango Bay Resort is a parking lot and beach access.

The ruins of the copper mine were at the bottom of a steep hill so we parked at the top and walked down. Fortunately we had a car that had enough power to go up the hills, this one I was a little nervous about the brakes because they were making a lot of noise and if they quit working we would end up going off a cliff into the ocean. Cornish miners built the ruins that remain today in the 1800s.


There weren’t as many flowers as I’d hoped to see, one reason I was told is that the island is quite dry so unless the flowers are watered you only see cactus.

We got to go see Biras Creek and got a tour by the resident caretaker Bob, who was glad to talk to Pam about what it was like when they were there and they compared notes on mutual friends. Right now the plans are unknown and the only buildings on the property habitable are his house and the house of the project manager. And what a view.

We spent a couple of nights on Anagada at the Anagada Beach Club which in my opinion was the nicest resort on the island (there are only a handful). There really isn’t much on the island, a lot of scrub, lots of cattle, lots of goats roaming, even some donkeys, it appears to be free range so if you don’t want them on your property you have to fence to keep them out, Virgin Gorda was the same way.

There is a flock of flamingos, maybe a couple hundred and type of iguana that are threatened by ferral cats. They have a “head start program” for the iguanas to let them get big enough so as to not be threatened by the cats. The iguanas are have been around for over 10,000 years. We didn’t see any in the wild, only saw some babies in the cages at the Head Start program.

This photo is from World Life Expectancy website of the type of Iguana on Anagada.

And the beach goes on forever.

I’ve never seen so many conch shells or such big ones.

After returning home I looked online at the damage done by the back to back cat 5 hurricanes Irma and Maria, and see how far they have come. With the remoteness of the islands and the extent of damage I can see why it has taken so long to recover. We’ve had our share of hurricanes but at least here everything does not have to come in on a boat. Most of the resorts I’ve mentioned on Virgin Gorda do not have roads going to them from the rest of the island. You can only get there by boat.

As far as the photos I saw of Tortola and St Thomas, wow, the devastation was amazing and actually I’m surprised how good they look now.

This trip was certainly an education, and a beautiful one. If I was to go again there are a few things I would like to do. We never went snorkeling or took the glass bottom boat tour. I would visit Prickly Pear Island in the North Sound. On the way to Virgin Gorda I would go to Jost Van Dyke, it’s hard to get back there from Virgin Gorda so need to do it on the way or on the way home. Also Beef Island – try to go to a Full Moon Party – visit the studio of Aragorn to see his fireballs – try to see the Mocko Jumbies, and I’m sure there is more. No matter how much time you have when you travel there is never enough time to see it all. But I do try!

Where to next? A month in Ft Myers and a few days in my favorite spot Key West.