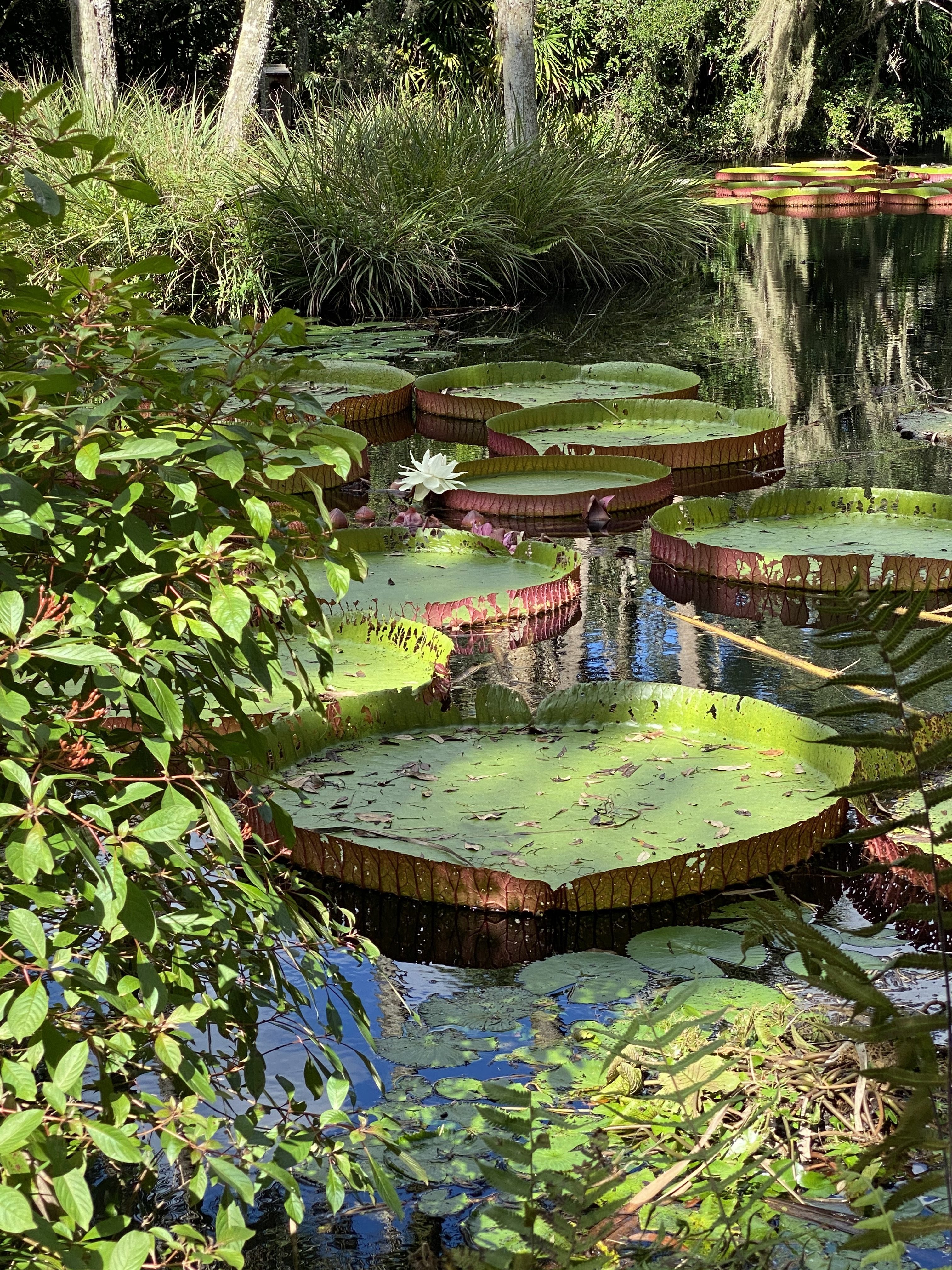 It was pointed out that I haven’t done a blog post in a while, I thought to myself I haven’t been anywhere….. but wait! I took a trip to Florida in November 2020. It started out with a trip to Blowing Rock, meeting up with friends (masking, social distancing, etc). On the way there I stopped at several places to ride my bike. The first was in Winston Salem – the Muddy Creek Trail. It’s not long – 4 miles – but it’s beautiful. Creek on one side and farm and woods on the other. It’s pretty enough to make two or three passes to get in more miles. Paved and wide enough for two trikes to ride side by side. 4 separate parking lots. Flat!

Then I struck off for an overnight at a Harvest Host. Harvest Hosts is a membership program that provides access to a network of wineries, farms, breweries, museums and other unique attractions that invite self-contained RVers to visit and stay overnight. I had never stayed at one so didn’t know what to expect. Where I stopped only had 4 spots but had water and 30/50 amp electric. Most don’t cost anything, they just ask you to buy something. Where I stayed had a farm and the cutest goats.

After I left there I rode 2 trails, Yadkin River Greenway, and the Lenior Greenway. Yadkin is in Wilkesboro – the part I rode is only 2 1/2 miles, the river on one side, on the other is a park, then industry, then just woods. Very nice, flat until you get to the end, then you come to a locked gate. I started at the YMCA. There is another section that I think the section I rode on will connect to eventually. I was going to do that part starting downtown but after walking a short way on it I realized it was a long way down to the river – about a mile, and I would never make it back up.

While in town I wanted to go to St Paul’s Episcopal Church to see Ben Long’s Frescos. I was there years ago. Unfortunately the church was closed but I wandered the grounds.

Yadkin Greenway was nice but the Lenior Greenway is spectacular!

It’s seven miles. I had a hard time finding the trail heads so ended up parking at a church right in the middle. When I got to the trailheads on each end there were bathrooms at one end, portajohns at the other. If we ever get around doing anything like this in New Bern I would say this is the trail we should fashion it after. There were only 2 short hills and you have enough warning to get some steam up and low gear I made it up both with no problem. There is sculpture along the way, you go along a river, woods, lots of markers, markers showing what trees you are seeing, even one of those little libraries! Lots of benches, shelters, even a few drinking fountains, one of those bike repair stands. Then off to the side are mountain bike trails. I would definitely go out of my way to ride this trail again! And this is just phase one of the trail. I’m really careful where I ride and park because I’m usually by myself, have felt very safe on the 3 trails I’ve ridden so far on this trip. Having my trike has definitely changed the way I travel. I like to wander but usually don’t get much exercise doing it. My trike has changed all that. Love it.

I have to admit I had never stopped at the actual Blowing Rock, it was a beautiful view.

After Blowing Rock I headed for Ft De Sota State Park in St Petersburg, FL. I was excited to be there but my visit was cut short due to hurricane Eta. They closed the park the next day so I continued to Ft Myers and spent the next few days holed up, waiting out the hurricane. After it passed I joined 2 other campers and we headed to Collier-Seminole State Park.

There was so much standing water that there was even too much water for the alligators. We had never seen so many right beside the road. Bike riding, a visit to Everglade City, walking in the Fakahatchee Strand State Preserve were a great distraction from the work I had waiting for me at home.

I started home and went through Lake Placid, a town full of murals.

My friend Judy mentioned the ridge of Florida, I hadn’t paid much attention to it before but as I drove it I realized it IS higher than surrounding land.

The Lake Wales Ridge, sometimes referred to as the Mid-Florida Ridge is a sand ridge running for about 150 miles in Central Florida. The ridge is clearly viewable from satellite, the white sands of the ridge are located Highlands, Polk, Osceola, Orange and Lake Counties. The highest point of the ridge is Sugarload Mountain at 312 feet which makes it the highest point in Florida. Another high point is Iron Mountain where Bok Tower is.

The sand comes from ancient oceans that once covered most of Florida, and unfortunately may again.

I’ve driven by Bok Tower many times but had never stopped, so decided this was the year. One of my early memories is a thermometer that my Grandma had from Bok Tower.

After arriving home I went back to working on my oil paintings – I was the featured artist at Carolina Creations for the month of December so wanted to get some new pieces ready for that. Here are 3 of the oil paintings I finished for that show and a pottery piece. I was pleased that I sold all 4 pieces.

I had seen on Facebook the mention of Heads of Presidents near Williamsburg, VA. I love quirky odd stuff like this. So off I went over Thanksgiving weekend to wander around giant heads in the mud. On the way up there I stopped and rode on the Dismal Swamp Trail. When we moved here 30 years ago this was part of the road you drove on.

Inspired by Mount Rushmore, Presidents Park was built for $10 million by Everette “Haley” Newman in 2004 so visitors could walk among 20-foot tall busts of the presidents while learning more about them. The busts themselves were created by modernist sculptor David Adickes. Doomed by a poor location and lack of visitors, the park went under in 2010.

The busts were supposed to be destroyed but Howard Hankins, a man whose construction company worked on the park, suggested moving them to his farm in Croaker, Virginia instead. As per Smithsonian Magazine’s article on the location, “so began the laborious process of moving 43 giant presidents, each weighing in between 11,000 and 20,000 pounds, to a field ten miles away. Hankins estimates the weeklong process cost about $50,000—not including the damage done to each sculpture during the move.”

It was interesting!! While there I rode around old Williamsburg on my bike then rode on several of the bike trails in the area. What a great place to bike! Many trails connect to one another. I rode 6 miles in Colonial Williamsburg, 18 miles on the Powhatan Creek Trail which connected to the Virginia Capital Trail, which connects to the East Coast Greenway. There is a really nice county campground Chickahominy Park Trailhead with a new pool and is a trailhead for the Virginia Capital Trail. I stopped at the Spoke + Art for a nosh and was entertained by a Jazz Duo outdoors. I’m guessing it’s about 10 miles to Jamestown and will do that ride in July.

Whats next? Hopefully a month in Florida when I’m tired of winter.