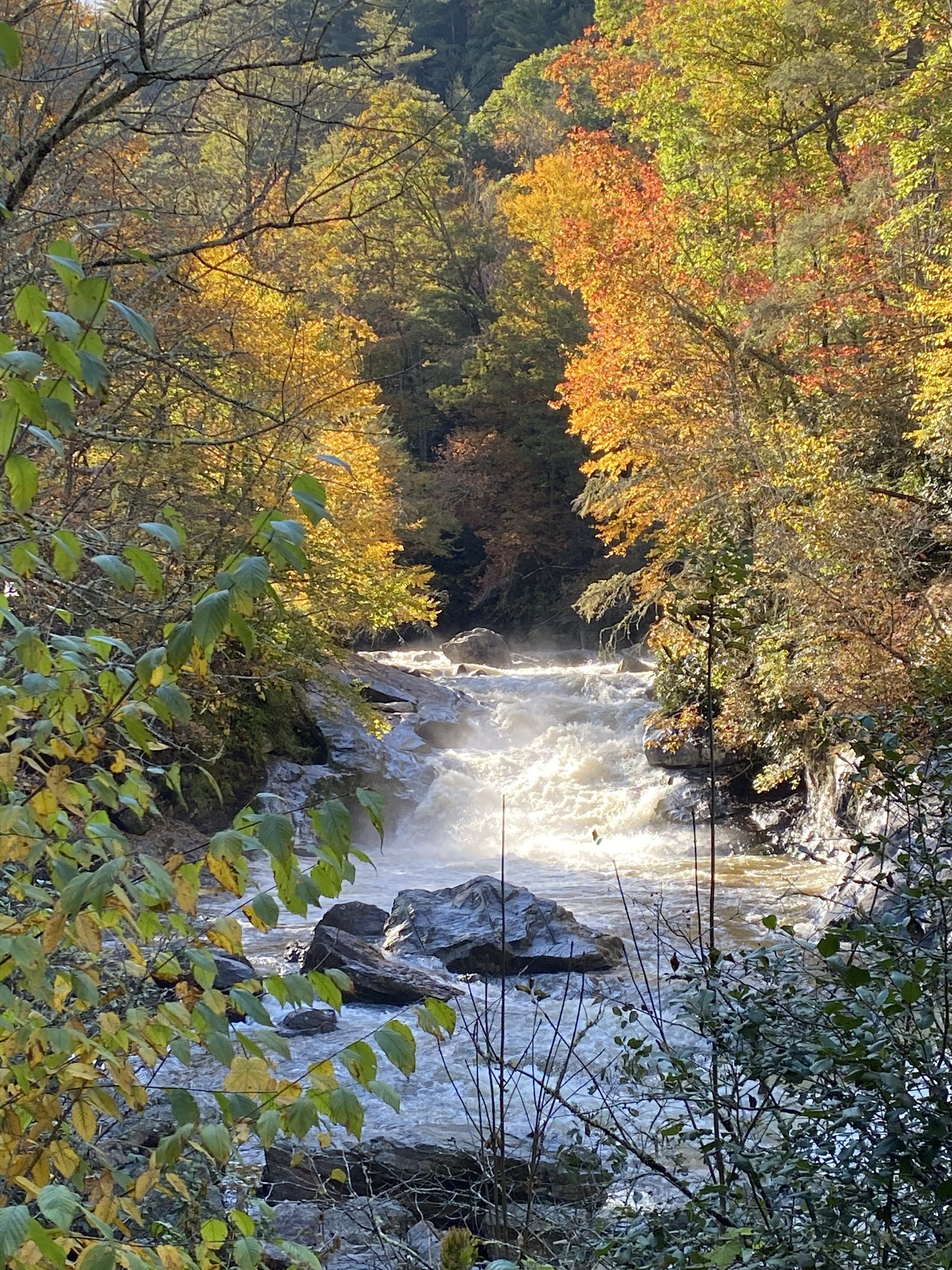 I’ve been wanting to work on my oil painting for quite a while. I never quite get there because I find I know what I’m doing with watercolors so always revert to that, and my default creative outlet that I can do no matter what is going on in my life and my world, is my pottery. So the oil painting always comes last.

Yes, I’ve done successful oil paintings in the past, but because I don’t do them all the time each time I start one it’s like I’ve never done one before so I struggle. Just to kick start the process I decided to take a 3 days workshop in Franklin, TN with Richard Oversmith. The 2nd reason for taking it is I’ve heard about Franklin but have never been there. For me the saying “I haven’t been everywhere but it’s on my list” rings so true!

On the way I decided to spend the night in Asheville and look at some of the public art.

I guess I have never driven under this overpass, or if I have it was before these murals were painted.

I didn’t have much time in Asheville but have to go back to ride the Greenways there. Especially the one along the French Broad River, they are working on major improvements there now. As always happens it seems, the artists move in then people start to take notice of an area, then soon the artists can’t afford to be there any more. Hope that doesn’t happen with the River Arts District. I first started going to the area about 20 years ago when Michael and I started making pottery. At that time I was just doing hand building and making tiles, then Michael started throwing pieces and I would decorate them, so we would go to Highwater Clays to pick up our clay. There were some artists there at that time but it was pretty low key. Around 2005 it really started to come alive. The good news is a lot of the buildings are owned by artists.

While there I read about an apple place in Serverville, TN so took a detour on my way to Franklin. The Apple Barn and Cider Mill was worth it. That’s one thing I miss about Michigan is the cider in the fall so always visit ever cider mill I hear about. My favorite is one near Mystic, CT called the BF Clyde Cider Mill, circa 1881 the oldest steam powered cider mill in the country I visited in 2016. It was probably a mistake to go to the Apple Barn because I ended up having a piece of apple pie with their homemade ice cream on it for breakfast!

From there I continued on and made a brief stop in Knoxville. I’d only ever driven through on the expressway before so didn’t realize how beautiful it is.

When I arrived in Franklin I decided to go to Leiper’s Fork before settling in for the night. It was one of the places we were supposed to paint at during the workshop. Which did not happen because the remnants of the hurricane came though on the day we were supposed to be there. Leiper’s Fork is just a wide spot in the road but is quite charming with some galleries and restaurants. It is definitely worth the visit if you fine yourself anywhere near Nashville.

Franklins Downtown is charming as well.


During the 3 day workshop Richard did a demo every morning explaining his thoughts as he went along then in the afternoons we painted. He was constantly on the move visiting each of us to give pointers. He did a great job of that, and didn’t let anyone monopolize his time (which happens sometimes in situations like this).

Our first day was painting at The Park at Harlinsdale Farm where we painted a barn, not exactly something I would choose to paint but the idea of going to a workshop like this is not to come out with a good painting it is to try something new and to learn. I’ve been to a few workshops through the years and find that my mind is swirling with what I’m learning and sometimes (or often) I’m not necessarily able to really absorb, it’s after I get home that I “get it”.

While the barn didn’t turn me on the Park was pretty cool, and well used, its big and right in the middle of town. Harlinsdale Farm has been called the most significant historic farm associated with the modern Tennessee Walking Horse industry. In 1933, W.W. Harlin established the farm on the northern outskirts of great renown in the fledging Tennessee Walking Horse Industry.  It’s 200 acres of rolling farmland.

Each evening after class I would roam the countryside. Wandering is my favorite thing to do. What a stunning area the south side of Nashville is! Rolling hills, streams, I described it to a friend as bucolic. Hundreds of huge estates, even the smaller houses in the country had a lot of land. Beautiful!! The Natchez Trace starts just outside of Franklin too. I’ve been on parts of that through the years, one day will just have to do the whole thing.

Day 2 we painted at another farm south of Franklin which was more my style.

Day 3 we got the tail end of the hurricane so had to paint inside. I sat in the doorway and painted some flowers on the porch.

One thing I like about traveling in the fall is seeing all the fall and Halloween decorations, I don’t decorate myself but like seeing them.

The other thing I like about traveling is I learn so much.

Before leaving the area I visited Nashville. I loved it. Once again I did a tour of murals. There are hundreds in Nashville and I saw just a few. I know I’ve been writing about a lot of murals lately, I’m not obsessed with them it’s just a way of seeing a lot of art without even getting out of your car and you can view them any time of the day. I may have gotten a few of these mixed up with those from Asheville.

Other things I loved about Nashville….. I assumed it was only about Country music, and assumed country everything else. Well I was wrong. I saw some very contemporary art, lots of nice old neighborhoods, lots of new contemporary architecture and lots of neat looking shops. And in the city and all around south of the city, major construction going on. I’m told it’s not just country music but all kinds of music is happening there all the time.

From Nashville I drove to Murphy, North Carolina for the night.

On the way I drove through Monteagle. It is home to the Monteagle Sunday School Assembly which I had never heard of. Monteagle Sunday School Assembly dates back to 1882, when the Sunday School Convention of Tennessee created an educational congress for Sunday school teachers. From ancient language to music, Sunday school teachers from across the South attended summer classes at the Assembly to broaden their experience. The first Assembly it appears was in Chautauqua, NY. Funny, I had not heard of that one either until I was in Florida in March and one of the ladies I met talked about having a condo there, so I read all about it and intended on visiting this summer, then all plans went out the window when Covid arrived.

Just before you get to to Monteagle is Sewanee. The town is cute and it is the home of Sewanee: The University of the South which was founded in 1857 and has a BEAUTIFUL wooded campus. The Chapel is the centerpiece of it.

A few other shots along the way.

The These photos were taken from my window in Murphy.

I have always planned on going to John C Campbell Folk School have never made it, never even been to Brasstown so made a detour to there. The school is not having on campus classes at the moment but the shop is open and it’s very nice with lots of great art in it.

Then I continued to Bryson City, again, never been, been very close but never have been there. They have some neat shops too, and it was very busy. I’m sure the Smoky Mountain Railroad is the driving force there. I took the train ride, made sure the steam engine would be pulling it, and made reservations for first class. They did a good job of social distancing, insisted on masks, and we were greeted with mimosas and gourmet muffins. The lunch was also good and the hostess in our car was very informative and attentive. I highly recommend the ride.

I did not stay here but a friend does whenever she goes to Bryson City. Have to say from the outside it looks pretty ratty and I would not have gone in if she didn’t tell me to. The Freymont Inn is on a hill above town. it’s pretty cool, built around 1921. I WILL stay there next time I’m in the area.

After my ride on the train I decided to drive to Highlands and glad I did.

That evening I drove the Road to Nowhere – The Road to Nowhere is an 8-mile drive outside Bryson City. It leads to a a 1,200-foot tunnel that was built for a scenic drive but never completed. It’s mostly woods but there are a few spots where you can see the vista. The National Park Service committed to rerouting the road and finishing it but never did.

Like I’ve said before there are just some things I won’t do by myself and hiking through this tunnel is one of them. It’s longer than it looks in this photo!

Then I drove to Cherokee which was just a few miles away. I didn’t really care for it but I understand there is a really good museum there.

I drove into the Smoky Mountain National Park then saw the turn off for Clingmans Dome. It is 7 miles off the main road. I got to mile 5 and came to a dead stop, a traffic jam at the top of the mountain! I sat in the jam for about 45 minutes inching along, many times I contemplated turning around, many people were parking and walking up but since it was close to dusk I was reluctant to do that. Just as I was about to give up I made it to the top and it was worth the wait!

Made a couple quick stops in Waynesville then Black Mountain.

And always stop at the Farmers Market just outside of Winston, open seven days a week.

I came home with inspiration for some new paintings, a new way to approach them and ready to get back to work. Next up …. camping for a week in the Everglades in early November.

Category: Road Trips
Search
About Me