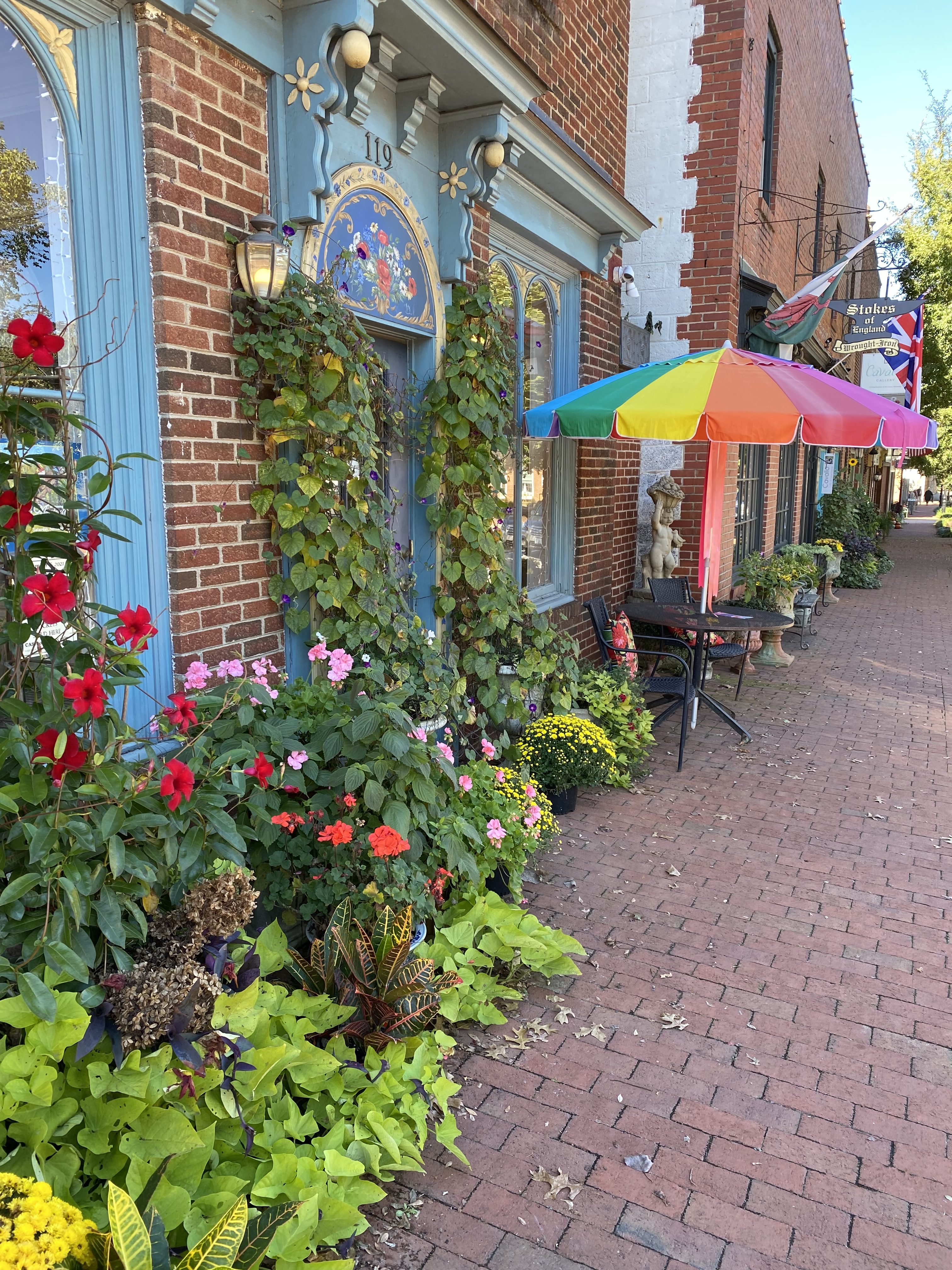 There were a couple trips this year I did not do blog posts about but want to mention them so they can be included in my blog book I print each year.

Two friends and I went to Charlottesville, VA to visit Monticello in October. On the way we stopped in Richmond and went to Maymont Italian Garden. I had never heard about it but ran across it when I looked up gardens in Richmond on the internet.

The gardens up near the house were beautiful but I really loved the Japanese garden down the hill, it was worth the climb back up.

From there we continued to Chrarlottesville. We walked around downtown and I saw (an purchased) a piece of artwork by the artist Randy Smith who lives in the downtown. I love his perspective and style. I’m trying to not be so literal in my paintings, we’ll see if his artwork can influence me.

We visited Monticello. The last time I was there was with my Mom. Actually it was the last visit I ever had with her. The funny (not) story about that visit was….. she was in a wheel chair and we went down to the gift shop (this was before they built the new visitors center) so the gift shop was just down the hill a little from the house. I asked in the gift shop if the path was such that I could wheel her down in the wheel chair rather than try to push her back up the hill to catch the shuttle. Oh yes they said. Well if another visitor hadn’t seen me struggling with the wheel chair trying to prevent her from taking off without me, she would have beat me to the car. Thank heavens for that stranger!

Anyway there was not a lot of plants in bloom but it was still a beautiful day and we enjoyed the visit.

We had a nice dinner in the Belmont area of Charlottesville and at The Local and had a delicious meal. Just across the street is a really nice shop that is worth a visit. It’s called Just Be.

We visited several wineries but the most interesting one was. Barboursville Vineyard. The winery is built on the grounds of Barboursville, the home of the 19th Governor of Virginia, James Barbour.. The home was built from 1814 through 1822 and was designed by Thomas Jefferson. This home is now just ruins. They have an Inn which was built in 1804.

We visited Sheperdsville and the pottery of John Pluta at Noon Whistle Pottery. I really like his whimsical work. They carry a lot of other artists, some that I carried at Carolina Creations when I owned the gallery.

Then we went to Gordonsville. There is a very nice gallery there Annie Gould Gallery, a couple eating places, and some lovely shops in their tiny downtown.

We made a quick stop at Appomattox Court House where the papers to end the Civil War were signed by Lee and Grant.

Then wandered south and had a fantastic lunch at a tiny cafe in Warrenton, NC called the Hardware Cafe, well worth a detour if you are anywhere close. And then home.

I went to Georgia to visit friends over Christmas. On the way wandering through Fuqua Varina I saw this beautiful gate. I know nothing about it but love it.

The friends I visited in Georgia were people Michael and I met within a month of us coming to New Bern. We lived on a boat at what was then the Ramada, now Bridgepointe. They had lived on a boat for years already. We then bought a house downtown and they sailed away but we have kept up with them ever since, over 30 years. After living on a boat for many years they bought a motorhome and traveled all over the country for 7 years and have just now bought a house in Georgia.

Most of the visit was spent talking about our travels around the world. We did go into Athens and walk around the downtown. This is a photo of their beautiful City Hall.

And had lunch at the Porterhouse Grill. Excellent! The restaurant is full of paintings by Heidi Hensley who I met years ago in Atlanta.

There is a cute neighborhood in Athens called five points. The commercial area is small but with a bookstore, bakery, chocolate shop and other retail shops in an intimate setting.

We went to see The Rock Hawk and the Rock Eagle Effigy just south of Eatonton. I never knew about them before.

The Rock Hawk Effigy is off Georgia Highway 16 which was once the Okfuskee Trail, a prehistoric trail that went from Charleston, SC to the Mississippi River.. They don’t know who built the Effigy or exactly when or why. But some speculate as long ago as 2000 years and perhaps were religious sites. The land was occupied by Native Americans. The effigy is made from milky quartz rocks and is in the shape of a hawk. Some of the rocks are so large that some archaeologists believe they were dragged there with the use of deerskins. The Hawk appears to be flying southeast.

The other one, The Rock Eagle Effigy is located at the University of Georgia 4-H Center on Highway 441. The WPA did several excavations in 1936 where they recovered small amounts of aboriginal pottery, chipped stone and items covered with a plaster like substance. In 1938 the WPA built the tower so you can climb up high enough to see the effigy.

And there are a couple dozen signs about the flora and fauna and other significant historical things in the area.

Eatonton is a town I’ve driven through several times on my way to somewhere else but I never really looked at the town other than stop a few times at the Uncle Remus Museum.

There is the Georgia Writers Museum and the town is full of beautiful architecture. I didn’t get to go to the museum because it was Christmas Day, another visit!

Three famous authors came from the county, Flannery O’Connor, Alice Walker and Joel Chandler Harris. There are signs all around directing you on a driving tour of their homes.

We visited Madison too. I’ve been there several times and love it, in fact after selling Carolina Creations I even considered moving there. It would not have been a bad choice, it is a beautiful area but I’m glad I stayed in New Bern, I can always visit Madison, especially now that my friends live just 20 miles away.

The last stop on this trip was at the Pearl Fryar Topiary Garden. The garden surrounds his house and you can wander around it. This was my second visit there. Now he has teamed up with several organizations to preserve and maintain the garden.

The last trip of the year was to Durham. The sun was not out and there wasn’t much in bloom but the Sarah Duke Garden was still beautiful.

And for some reason I had never been to the Nashar Museum of Art. Which is right next door. They have some beautiful pieces in their permanent collection – my favorite is this portrait by Joaquín Sorolla of Sarah Duke. I was thrilled to see it. In the spring I hope to go to Madrid while on a tour and visit his home and museum.

2021 was a good year for me even with dodging COVID. Looking forward to a peaceful 2022.