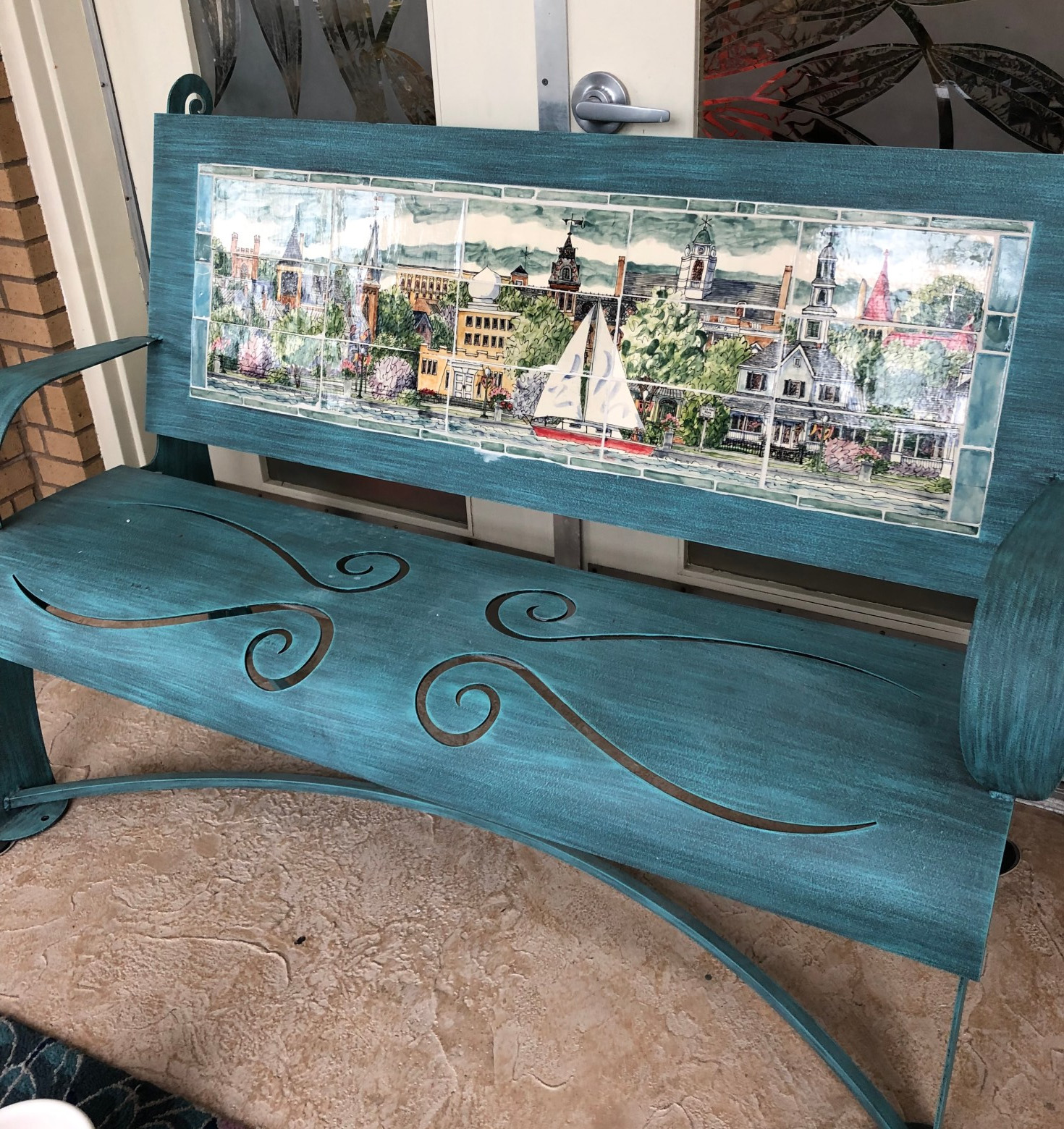 In ceramics things can be more complicated than they first appear!

New Bern NC Bench by Janet Francoeur – A couple years ago when we were at UNC Hospital I saw benches in the garden. I knew immediately who did the metal work, one of our artists (we used to carry) at Carolina Creations, and sure enough when I called Cindy, she said yes, they had built the bench and a potter from Chapel Hill had made the tiles.

I asked her to make two of them for me. Cindy said they wanted to make a few changes on the design and after a few months they arrived at our studio. That was a funny story in itself. These benches weigh A LOT! They are made of heavy gauge steel, zinc galvanized to prevent rusting,  painted with high quality marine grade epoxy paints, and like I said are heavy.

The trucker got them off the truck and onto the sidewalk. After some head scratching Michael and I got out two hand trucks and we managed to inch both of the benches closer to the studio door. It was a lot of work and we finally sat down on one of them to rest. Just then two young ladies came along and said “do you need some help?” They picked up each of the benches and carried them into the studio!

Then our lives got really complicated and they have been sitting in our entryway ever since. I’m finally at the point that I can tackle them. On one of the benches I decided to do a new bern scene like I’ve done for some back splashes and platters. The only problem is I use earthenware for the back splashes and platters – and it won’t hold up outside in freezing and thawing conditions.

So you would think I would just go and get other clay. It’s not that easy. There are lots of kinds of clay and they all are not appropriate for tile making. So you have to do a lot of testing, will they fire flat? Will my glazes hold their color at a higher temperature? If there is too much grog in it will I be able to draw a straight line?

Well the first clay I tried had way too much grog in it, I couldn’t get a smooth enough surface to draw on. I’ll use that clay to make some totems with. So I eventually bought 4 different kinds of clay and finally found one I liked.

The clay shrinks as it dries then more again when fired so I had to figure the shrinkage out. The people that blend the clay give you a shrinkage rate but like everything in ceramics you need to do your own testing.

I rolled out a strip of clay and marked it off by 1/2 inch increments. Then I could use that to measure the bench opening to see how big my clay slab needed to be (also considering room for grout lines between the tiles).

So you can see in this photo that from wet to being fired to cone 5 it had shrunk by a whole inch .

I made a test of my underglazes to see how the color holds up at the hotter cone 5. Usually the reds burn out but these Spectrum underglazes seemed to hold up. I had to find a clear glaze to go over my underglazes, since the one I’m used to using will not fire to the cone 5 that I need. I glazed half of the tiles with the cone 5 clear gloss and half with cone 5 clear matt. The right side is gloss the left mat, I like the gloss better. In some glazes you can’t see any difference in others you can.

I got the tiles made….

dried them, fired them to cone 04 then I drew the image onto the tiles with pencil…then colored with underglazes…

then covered them with clear glaze and fired to cone 5, which is the vitrification temperature of this particular clay.

Vitrification is the hardening, tightening and finally the partial glassification of the clay. Vitrification results from fusions or melting of the various components of the clay. The strength of fired clay is increased by the formation of new crystalline growth within the clay body, particularly the growth of mullite crystals. Mullite is an aluminum silicate characterized by a long needlelike crystal. These lace the structure together, giving it cohesion and strength. (from The Big Ceramic Store Website)

Then there is the issue of attaching the tiles to the bench. I needed to build up the base and was not comfortable attaching them directly to the metal so I used Wedi Board, Wedi Board is lightweight, easy to cut, and a completely waterproof tile backer board.

I attached the Wedi Board to the bench with a urethane adhesive…I had to figure out what was the best for that – it had to be suitable for a wet application and outdoors.

…then I covered the board with adhesive and attached the tiles leaving even (well kind of even) grout lines.

Once the adhesive had dried I applied grout that I treated for outdoor use.

And DONE! It only took me a couple years to do.

Like I said, things sometimes are more complicated than they first appear.