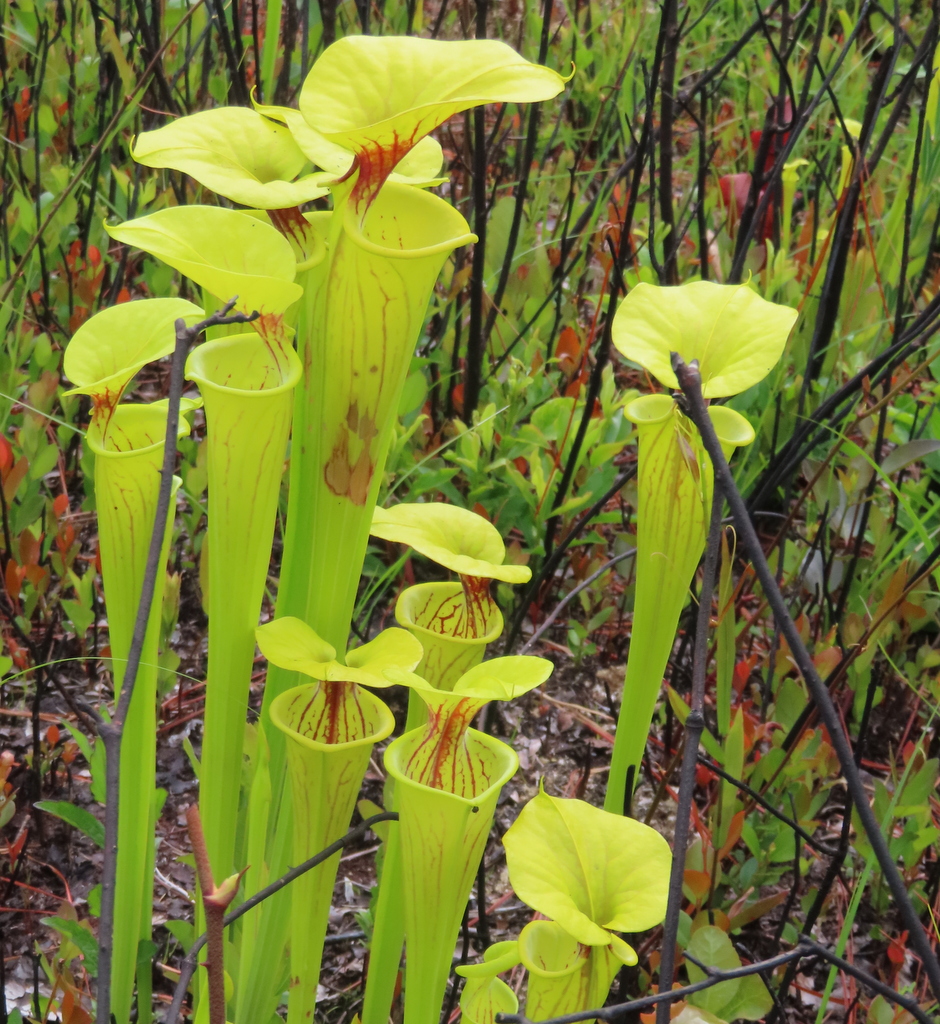 I hadn’t been in the Croatan in years, like maybe 20 or more, but I saw photos from a friend and decided I had to go. I’ve now been twice, once with a friend and once by myself. I was a little leery to go by myself but I went anyway, it wasn’t the animals, snakes or bugs I was worried about, it was other people. Luckily I only saw some bicycle riders the first time and no people the second.

I thought it would be really hard to find the carnivorous plants thinking (I don’t know why) that they were like morel mushrooms and you never knew where they would show up. And I would have to wander aimlessly through the woods looking for them. That was not the case! They were just off the road. As I was driving in I could see that the forest had been burned this year, at least the part I was in. This helps the plants thrive and also makes it easier to see the plants and walk into the woods to them. More about that later. The easiest ones to spot were the green pitcher plants with their chartreuse green color, and the fact that they are tall.

The first spot had about 100 green pitcher plants, 1000 flytraps, and a half dozen orchids. Wow!

Another spot had a different type of tiny pitcher plants, sundews, bladderworts, and butterworts and there were lots of other types of wild flowers scattered about.

Of course as instructed I had on boots, long pants, and lots of bug spray. Because the wind was blowing both times the bugs were not a problem anyway but I guess the danger of ticks was still there.

I’m amazed at how this photo above turned out, I was at least 10 feet away with my hand held camera wondering what the flower was because I was too far away to see.

SO many wildflowers, I was blown away.

There are over 80 different species of the Butterwort. Like other carnivorous plants the leaf is like sticky flypaper, the bug lands on it, can’t fly away, and the leaf slowly rolls up around it.

Sundew – Insects land on its sticky leaves and are trapped there. It slowly rolls up the leaf and digests the insect.

I should have gotten out of the car, I just shot this out of the window, this flower is supposed to be very aromatic but can be toxic if you eat it.

About fires in the forest. We lived in Colorado when Yellowstone burned, in 1988. We were 9 hours away yet our valley filled up with smoke from it. People were in an uproar but historically, before people built homes in the forest, the forest burned naturally. This kept the undergrowth under control and weeded out the dead trees allowing the important tree species to grow with less competition for nutrients.

Before the late 1960 fires in forests were put out as soon as possible but as people began to realize the benefit of fire for the ecology the managers began allowing natural fires to burn under controlled conditions which reduced the areas lost to wildfires each year.

When fire clears the thick undergrowth sunlight can then reach the forest floor and encourage the growth of native species, like these carnivorous plants. They burn our forest regularly which is one reason we have so many of these plants. If they did not eventually the undergrowth would smother them.

I was able to identify these plants easily with an app I have on my phone called Picture This. You have to pay for it but I thought it was worth it and have used it a lot.

There is a great page on the internet featuring Tom Glasgow from our North Carolina Cooperative Extension Office with videos about the different types of carnivorous plants in the Croatan. You can watch it here!

It won’t be the last time I go into the forest and it won’t be long before you’ll see some of these plants showing up on my pottery.