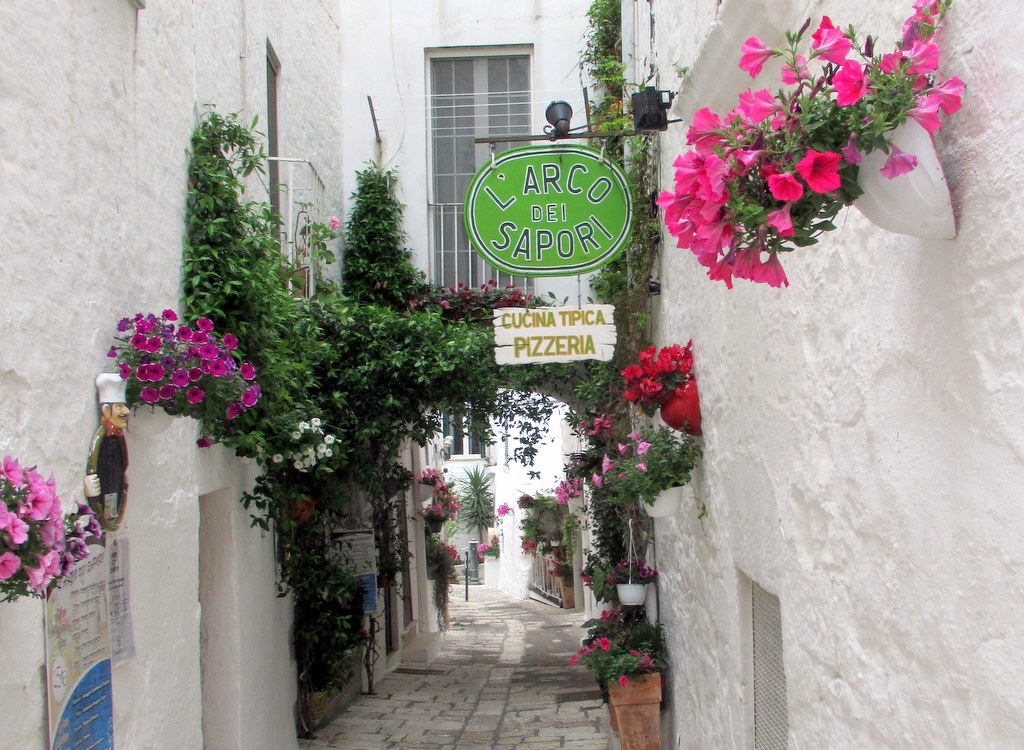 Lecce is in the heel of Italy’s boot, with olive trees as far as the eye can see. It is called the Florence of the South because of its baroque architecture. As we found in Bari the shops close from 1-3 for siesta! I don’t remember them doing this in other parts of Italy I have visited. And it might just be in the old part of town that this happens.

While the history of Lecce goes way back the period Lecce is most famous for is the 17th century when the Palaces and churches were built in the Baroque style out of soft local limestone. The Basilica di Santa Croce is the focal point of the old city with its amazing facade. But there are many other fabulously decorated churches in this small space.


You can still see ruins of a Roman amphitheatre which is at the dividing line of the old and new city. The amphitheatre is surrounded by buildings put up by Batista – Fascist architecture – which we saw a lot of in Napoli. It is partly buried because other ancient building were built on top of it. In its day it would hold 20,000. It is still used today for concerts and celebrations. Only the lower tier of seats remain. Near the square theatre there is a pre-Roman necropolis where Messapian inscriptions have been found.

There are a lot of beautiful shops with local art. I don’t recall seeing the pumi before. Pumi are decorative elements in a form recalling a bud that is going to bloom. Symbolizing prosperity and fertility, in the folk culture of the Southern Italy they defend from evil. Deeply rooted in the traditional culture of the ‘heel of the boot’, Pumi are very popular in Puglia, decorating magnificent palaces as well as simple balconies. I could do without the fertility but had to have one to take home.

We had a great time shopping in Lecce, both Bobbi and I met artists and purchased there work. We saw a lot of earthenware sculpture with a white glaze – love it.

This region is also famous for its papier mâché.

We went to Otranto for a quick visit, and had a wonderful farm to table meal and wine tasting close by.

We left Lecce the next day and drove to Ostuni – the White City on the top of a hill. Ostuni is located in a region that has been inhabited since the stone age. It is believed to have to been founded by the Messapii, destroyed by the armies of Hannibal during the Punic Wars and then re-built by the Greeks – hence the Ostuni name meaning “new town.”

Its whitewashed defensive walls and houses in the old town with many winding streets, steps and beautifully decorated, colorful window frames can make you think you’re somewhere in Greece. Ostuni’s history is shown predominately within it’s architecture; with many buildings still standing dating back as far as 990 AD when the city was sacked by the Normans and added to it’s own county. The majority of buildings date from 1300 to 1463.

As I discovered the last time I was in Italy the further south I got the more I liked the food and the fewer people there were – well once you get away from Napoli.