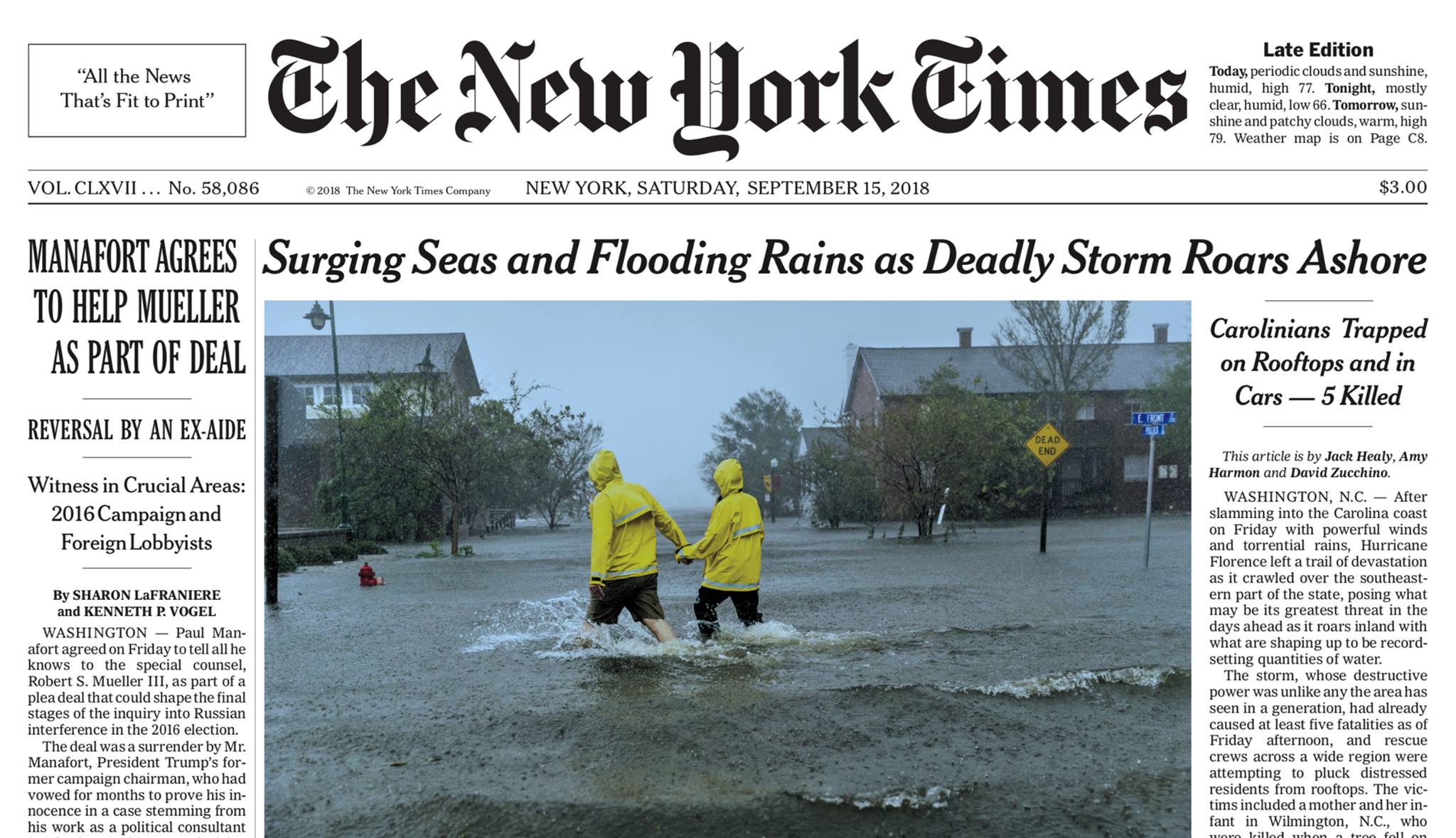 This is not how I wanted the corner I live on to make the front page of the New York Times. My house is just to the right of these folks.

This is for my folks and friends that don’t live near.  We are always reluctant to evacuate because it can be hard to return. When a hurricane strikes and you are by the water, first the water is pushed in (if you are in the NE quadrant like we were for Florence – the absolute worse position to be in in a hurricane), causing flooding from wind – which is what affects my particular location, then when it goes by then the water goes down but the rain inland causes the rivers to flood away from us cutting New Bern off. We may be high and dry by then but we can’t get back home.   That did happen from Florence but we threaded the needle and got home before we were cut off. Then by the end of the week even Hwy 70 was back open. However it was another week before you could travel south on 17 because the bridge in Pollocksviille was severely damaged.

Anyway I got home and for the first time I almost cried, I could not get my key in the front door. No locksmith answered their phones. I didn’t have a key to the other doors, the electricity was out so I could not get in through the garage door. Spraying air into the lock did not help.

My neighbors Kim and Steven Wynn came to the rescue, Steven came with a spray bottle of water and finally got the key in the door. It took some strength but the door finally opened and we went in. What a mess.

You can see where the waterline was. Lucky or good planning that the electric recepticales are higher than the 4′ of water. Everything was covered with muddy slime. Unfortunately only one of my work tables was high enough, The things I put on top of all but one of them got wet – 85% of the stuff below the water line was ruined. Tools rust within a day or two of being submerged, I didn’t know that.

The real heart breaker was the kiln room.

Somewhere is this mess is 3 kilns blown apart. Usually when we have a hurricane the water rises slowly. I expected that to happen this time, instead we were hit with that storm surge they always talk about, that we haven’t had, or at least this much, in the 29 years I’ve lived here. This time the 4 feet of water that came into my house all came at once, like a wall, with waves on top of it. And the fact that it moved so slowly allowed it to pile up much more water than it would have if it was a fast mover, like Michael that just hit Florida.

This was all within a block of my house, areas like Fairfield Harbor and River Bend had a lot of flooding as well, more than has been seen in decades.

We are now a few weeks past Florence, and if you drive around New Bern you’ll still see some piles of peoples belongings along some roads, you’ll see some broken trees and some blue tarps on some roofs, but most of town looks normal. We are so grateful that we didn’t get hit like a 4 like hit Mexico Beach, and completely wiped them off the map.