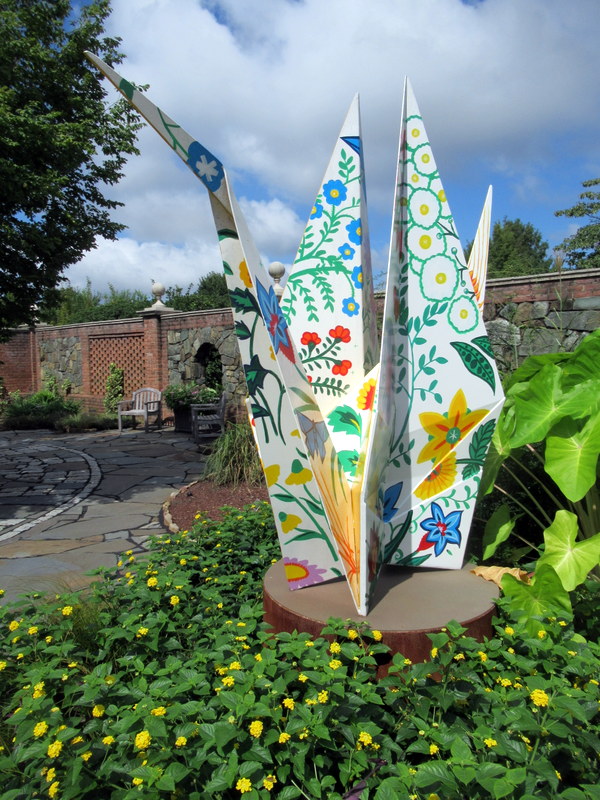 I’ve never been told to evacuate before. It was odd (after trying to move stuff out of the way of flooding) that as I looked around as to what I needed to take with me, I thought, it’s all just stuff. An interesting feeling. I didn’t want to leave but didn’t know what else to do. So headed north.

I-95 was busy but traffic moving well to Richmond. Stopped for a break at the Lewis Ginter Botanical Garden (which is on my list for a potty break every time I pass through). Was just going to peek out the window, check out the gift shop, and then be on my way. Noticed there was an interesting looking garden sculpture, looked like origami, metal sculptures by Kevin Box, my friend stopped at the desk and asked about them. She also mentioned that we were evacuees and one of them gave us free passes and said, “go in an take a look” – wow!

These gardens are in my top 5 favorite Botanical Gardens in the country.

The show “Origami in the Garden” was fabulous, as were the flowers. Here’s a link and here are some of my photos.

We continued on our trek north and stopped for gas. I searched for my wallet, fortunately I had a credit card and some cash stuffed in my pockets (a bad habit I have but as my friend IB says, it is what it is), I was glad this time! I realized I left it at a Wendy’s in Stony Creek, I called and of course they did not find it. So spent the next hour calling cc companies and cancelling cards. As the afternoon went on I realized I had other cards I needed to replace. Ugh.

We arrived exhausted at our destination near Columbia, MD, took a sleeping aide, and slept all night not thinking about Florence at all (or trying not to).

Of course the next morning we obsessed about Florence all day, not being able to take our eyes off the tv. Started working on a painting for my 2019 calendar. The painting I’m working on is the new “The Jarvis at 220” which is in my block, and the Pollock Street Pub & Oyster Bar also on my block. It turns out the Jarvis had water in the basement, the Pollock Street Pub & Oyster Bar, like my house, had water inside their first floor.

Since I was so close to Philadelphia (120 miles) I decided to go to pick up my sculpture, the rabbit I made this summer. This is the first I’ve seen it since it was fired.

On our way to Philadelphia we stopped to eat. I was on the phone with my sister telling her about the flooding, after I hung up this little old lady spoke up and said “You can come to my house – I live alone and I have lots of room!” People can be so kind.

We stopped at the best Ceramic supply store I’ve ever been in at Norristown to pick up stuff. Even though I knew my pottery studio was flooded I knew I had work to make for people. If my electric is compromised I’ll see if I can have someone fire for me. It’s the ceramic shop, http://www.theceramicshop.com.

Of course I can’t go to Philadelphia with out going to the Reading Terminal and eating at The Dutch Eating Place. It was a tradition for Michael and I every time we went to Philadelphia, wish he was there with me.

We cruised South Street to look at Isiah’s mosiacs.

Then started shopping for cleaning supplies to take home.

We spent the weekend glued to the tv watching the aftermath of Florence and seeing horrible photos of what she had done to our town. I knew I had a lot of water in my house so at this point my biggest concern was that the house was secure, were my doors caved in? Were there walls caved in?  I was able to connect with some people via Facebook and asked them to let me know. They did and the house was secure. This is one of the photos I was sent.

I could see the high water mark on the wall, 4′ up. And that bench in the foreground weighs over 100 pounds, amazing how much power water has to move things.

One of the things we hate when they talk about evacuation is that often you can’t get back, in your town the water might have receded but inland the water is just rising flooding the roads we need to take back in.

We drove home on Monday and it was pretty spooky seeing the signs saying I-95 closed.

We got off on 64 headed east, by the time we got to Washington we started seeing signs of hurricane damage. But we were able to drive right in.

Next post – what I found when I got home……